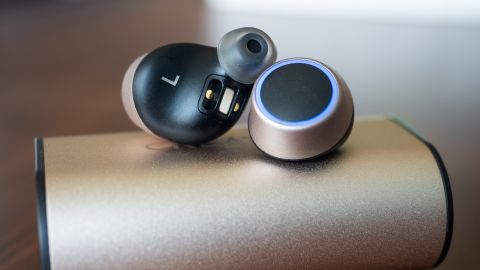 The Creative Outlier Golds offer best-in-class battery life and excellent sound quality for the price. You’ll have to spend much more to get better sound and even more expensive competitors can’t touch their battery life. These headphones offer a ton of value for money and we can easily recommend them.

True wireless headphones are the hottest segment in personal audio today and, as a result, it’s extremely difficult for brands to stand out. Headphone makers now have to have a feature or design that significantly stands out from the competition. For Creative, that single feature is battery life.

Even better, the headphones offer great sound, water resistance, and Bluetooth 5.0 on top of its class-leading battery life, making them an easy recommendation for those who want a solid pair of true wireless headphones.

The Creative Outlier Gold’s design isn’t revolutionary but it gets the job done. The earbuds themselves are about the same size as the excellent Jabra Elite 65t. While the Outlier Golds fit comfortably in our ears just fine, those with small ears may want to go with a more compact design like the RHA TrueConnect.

The headphones feature two buttons, one on each earbud, to control music playback, volume, and your phone’s voice assistant. Each of the buttons is surrounded by an LED ring that lights up to show the headphone’s status.

The buttons themselves work well, but require a bit of pressure to trigger, which is slightly uncomfortable as you have to press the earbuds into your ears.

Both the case and earbuds are made of the same matte plastic material that feels cheap but the headphones are well-built regardless of feeling cheap.

The charging case of the Creative Outlier Gold features a slider mechanism to reveal the earbuds - and we didn't hear any creaks or rattles from the case or headphones when we were using them.

The charging case features several LEDs on the side to indicate charging status as well as battery life. There’s also USB-C for charging.

Sound quality of the Creative Outlier Gold is warm and punchy. The tonal curve is slightly “U” shaped, which means bass and highs are elevated with the mids being slightly recessed. Bass quality is good, with beats hitting hard without sounding distorted or bloated. However, bass was overwhelming for some tracks, burying the mids. Highs feature good resolution and extension, and never sound harsh.

The headphones support Super X-Fi audio, which is software that gives music a simulated soundstage. This means music sounds like it’s coming from all around you instead of between your head.

We tried Super X-Fi on our iPhone Xs and while the music did sound dramatically wider and three-dimensional, it also sounded quite artificial. Plus, Super X-Fi only support music that’s locally stored on a device, making it incompatible with streaming services. While a nice addition to the overall package, Super X-Fi doesn’t need to be enabled to enjoy solid audio quality from the Outlier Gold.

Connection strength is good, though we did experience a few audio breakups over our week of testing. That said, the addition of Bluetooth 5.0 support means each earbud connects to the phone independently and can be used without the other, which is a nice change from true wireless earbuds that depend on a connection between the buds to work.

We found that Creative’s claimed 14-hours of playback was just slightly ambitious with our tests tapping out around 12 hours with music playing at 50% volume. The charging case indeed charges the headphones over two and a half times from flat, making it a challenge to drain throughout our week of testing. The Outlier Golds are one of the rare true wireless headphones that can last a flight between San Francisco and New York and then some.

The Creative Outlier Gold are an excellent value at $99 (about £80, AUD$130). We love the headphones for their incredible endurance, fun, punchy sound, and reliable wireless connection. While we would have loved to have seen metal construction, it would have driven the price up. At the end of the day, the Creative Outlier Gold are one of the best true wireless headphones you can buy for under $100.

For slightly more money, the $130 (£150, AU$199) Sol Republic Amps Air 2.0 offer even punchier bass and 45 hours of combined playback. However, the Amps Air 2.0 only last 3 hours on a single charge. The Samsung Galaxy Buds are slightly more expensive but work best with Samsung phones only and feature middling sound quality.