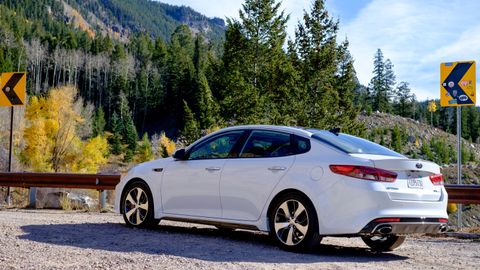 Kia has a winner on its hands, with plenty of useful technology and amenities matched with good road feel, steering response, suspension tuning and sharp looks.

Mid-size sedans are the bread and butter of the American automotive industry, falling just behind pickup trucks in terms of overall sales. This highly competitive segment is where every manufacturer brings its A-game to grab a chunk of the combined yearly sales that reach nearly 2.4 million vehicles.

If you asked what I thought about Kia vehicles a decade ago, the answer would have included not-so-kind remarks and plenty of sarcasm. That was always the case when it came to Korean vehicles, which earned a reputation for terrible quality vehicles in the '80s and '90s.

Armed with a 10-year powertrain warranty and quickly learning to build better cars, Kia kicked off the new millennium with its first generation Optima, which was as plain as vanilla ice cream. It wasn't until 2010, when Kia unveiled the Peter Schreyer-designed Optima, that I finally was able to combine the words "Kia" and "stunning" into a single sentence. Prior to joining Kia in 2006, Schreyer contributed to Audi's and Volkswagens, including the TT, fourth generation Golf and new Beetle. He is now the chief designer for all Hyundai and Kia vehicles.

Five years later, and my opinion stays the same: the 2010-2015 Optima is one of the best looking midsize sedans available, and Peter Schreyer's styling has aged gracefully. Regardless, it's time for a change, and the new 2016 Kia Optima debuted at the New York Auto Show earlier this year with subtle visual updates while presenting a completely different car.

Styling-wise, the 2016 Optima doesn't look very distinguishable from its striking predecessor. Some may say the new model is more conservative, which I agree with. However, the 2016 redesign is the equivalent of putting on a tailored suit and tie. The new Optima keeps the same basic shape and form of the previous generation but subtly evolves visual details by smoothing out the the sharp edges and lines to add a touch more elegance while maintaining a recognizable face.

I like the new design, especially from behind. But unfortunately, as with other cars in the mid-size segment, there's excessive use of chrome details.

Inside is where you spend most of your time in a car, and Kia crafted an attractive, driver-focused cabin. Step into the Optima SX – Kia loaned techradar for review – and you're treated with leather heated seats that get very toasty. (Ventilated seats are optional on the SX and standard on the SX Limited.)

Grab the steering wheel, and you're treated to a leather-wrapped, flat-bottom wheel with thumb grips that give the car a performance-oriented look and feel. The wheel is heated and gets very warm for those cold morning drives to work in the winter.

The seats are very comfortable for long drives without any shoulder or neck pain. Lumbar adjustments eliminate lower back pain by providing support that suits the curvature of your back. There's the right amount of width and side bolster to support my 5-foot, 7-inch and 195-pound frame too. The Optima SX and SX Limited feature 12-way adjustable power seats for the driver with 4-way lumbar adjustments – a 10-way power passenger seat with 2-way lumbar is optional on the SX and standard on the SX Limited.

I'm a fan of the new headrest design, a soft plush cushion with a pillow-like feel. Opt for the SX Limited trim, and the seats are wrapped in fine Nappa leather with a diamond quilt pattern – for that extra touch of class.

Look forward, and you're treated to a pair of analog gauges for the speedometer and tachometer with an LCD display sandwiched in between. The gauge cluster LCD display provides access to vehicle settings, such as light-off delay time, automatic door locks, driver assists and more.

This way, you can make quick changes to match your personal preferences without having to bring the car into the dealership. The display also ties into the navigation software to show turn-by-turn directions and basic vehicle information including fuel economy, tire pressure and trip meters.

Interior materials are good with tight fit and finish suitable for a luxury sedan in the price range. Kia employs high-quality soft touch materials on the upper half of the dashboard while the lower parts consist of cheaper hard plastics, but this is fairly normal for other mid-size cars too.

The door panels are wrapped generously in vinyl, with plenty of soft touch materials, too. Overall, the interior layout, materials and level of comfort in the new Optima are good and it's a great place to be for your daily commute and roadtrips. The driver-focused interior puts you in control of the car with easy to reach buttons and knobs and the most frequently touched surfaces, such as the armrest and steering wheel is wrapped in leather.

There is one annoyance I have with the interior, one that affects most of the Optima vehicles, and that's the foot-operated parking brake. While vehicles with adaptive cruise control get an electronic parking brake, most of the Optima models will ship with the foot-operated brake that looks more like it belongs in an '80s pickup truck than a modern car. It's a small nitpick that still bugs me since manufacturers began moving away from the hand-brake.

Kia employs its AVN 4.0 infotainment platform in the 2016 Optima, powered by a Freescale i.MX53 System on a Chip (SoC) and a Linux-based operating system. The single-core ARM Cortex-A9 SoC is ancient by modern smartphone standards but perfectly adequate for in-car navigation.

Mounted high and center on the Optima dashboard is an 8-inch touch screen with a resolution of 800 x 480. The display isn't as crisp as the latest Apple Retina displays or WQHD displays on Android flagships, but you're not looking at fine details from your driving position, so I have no problems with it.

The Visuals used for the interface are easy on the eyes and easily legible from the driver's seat. Touch response is excellent without lag, despite employing a resistive (plastic, no multi-touch) touch display rather than capacitive (glass, supports multi-touch), which dominates the mobile tech world.

There are radio controls on the left-side of the steering wheel for similar functions, too. I appreciate the physical controls, as they provide quicker and direct feedback when turning up the volume or changing the music source while focusing on the road. Placing the steering wheel controls on the left-hand side is perfect for those that drive primarily with their left hand on the wheel.

The user interface is very intuitive, with quick access to your audio sources, UVO apps, navigation and settings – the functions aren't buried beneath layers of sub-menus. Pairing your phone is an easy process that's triggered when you press the phone button without a device paired to the car.

When a SiriusXM station is set to one of the first six presets, music is constantly recorded, so you can channel surf and restart a song that's already playing. Navigation maps are plain and flat but do the job. Kia's maps aren't as detailed as the 3D maps used by Ford and luxury car makers but adequate for getting you around town.

SiriusXM NavTraffic support is integrated in the infotainment system, but I find the feature quite useless. Unless you're entering an address into the navigation everywhere you go, SiriusXM NavTraffic does not know where you're going and will not recommend alternative routes if there's a jam or congestion.

There's also the problem in which I can see a jam in front of me, but NavTraffic doesn't show any congested traffic. A subscription costs $3.99 a month after the initial three-month trial period expires, but you're better off saving the money and using Google Maps or Waze for commuting.

Those that heavily rely on a smartphone everyday will be happy to hear that the 2016 Optima supports Android Auto, which lets your smartphone take over the in-vehicle display with a Google Now-esque interface. The Kia Optima user interface lets drivers listen to music via the car's sources while letting Android Auto take over the screen for Google Now cards or Google Maps navigation.

I played with Android Auto in the car and found no performance issues with my Motorola Nexus 6.

There is one downside, though, and it's the power output from the USB port: I measured power output at 0.8-amps using a Drok USB Volt Amp Meter. This is plenty to charge the phone while using navigation, but it doesn't charge very fast.

Audio quality from Android Auto is disappointing, but that's Google's fault and not Kia's. Android Auto sends music via Bluetooth instead of the USB connection already in use, unfortunately.

Newfangled iPhone 6S users are left out at launch with the new Optima. Kia promises Apple CarPlay support with the Optima and other vehicles next year via a software update. I've played with development units (a box with the infotainment system, not in a car) and haven't encountered any issues. The feature mirrors iOS functions to the vehicle display so you have the standard home button that's now on-screen and the iOS grid layout for CarPlay compatible apps.

The infotainment system does feature apps, such as Pandora, Yelp and the UVO features. Pandora integration uses Bluetooth for Android and a wired connection for iOS. Sound quality is obviously better through iOS, thanks to the wired connection. I didn't get a chance to test out the other UVO features, as the user logins were not provided with Kia's sample car for review, unfortunately.

Bluetooth phone connectivity is straightforward, with good call quality on iOS and Android that was free of hisses, pops or the person on the other end of the line complaining about not hearing me. There's nothing out of the ordinary in terms of functionality. The infotainment system can connect to phones via Bluetooth and download the contact list and call history.

Kia's phone system does not support text messages. However, you're better off using Android Auto or the upcoming CarPlay functions, as Apple and Google will let you dictate messages using cloud-based services.