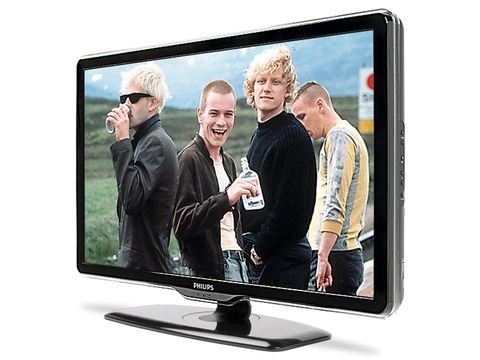 The Philips 32PFL7404's frame seems to have been designed to contain its Ambilight tech, but it is conspicuously absent

Not quite reference-standard, but this versatile and dependable LCD TV with 100Hz is still very good

Those following Philips' meteoric rise up the TV charts this year will know that this 32-in set, at £700 (or less if you search online) is one tempting prospect. But while it's packed with top technology such as 100Hz (to reduce blur) and HD Natural Motion (to get rid of judder from Blu-ray), a few features have been given the boot.

It is a shame that the 32PFL7404 only has Pixel Precise HD instead of the latest Perfect Pixel HD picture processing that's so impressed us on recent high-end sets. A lite version of its bigger brother it may be, (there's no Perfect Contrast or Perfect Colour), but it's basically the same.

The main success of Perfect Pixel HD is HD Natural Motion, which is included on this set. By inserting predicted video frames, the system is capable of creating super-smooth and often dizzyingly realistic pictures, primarily from Blu-ray discs.

Despite that, there is evidence that the 32PFL7404 is a budget set, at least by Philips' standards. Absent is internet connectivity, either wired or wireless, as well as Ambilight – although a remnant of that light show so loved by Philips can be seen on the 32PFL7404; a trademark plastic hood surrounds the screen, although it's really designed to catch the Ambilight LEDs. It seems redundant here and needlessly clutters the frame.

Inserting a memory stick of digital files is pleasingly fruitful; embedded software is capable of playing MP3 music, JPEG photos plus MP4 and AVI video files. Helpfully, the set only lists titles of files it can actually play, alongside a thumb-nailed preview.

While not as comprehensive as other models in Philips' canon, there's a good selection of picture settings with which to experiment. The Pixel Precise HD menu includes settings for HD Natural Motion; 100Hz Clear LCD and dynamic sharpness, contrast, backlight and colour enhancement.

The onscreen menu system on the 32PFL7404 is impressively simple. A 'Home' screen includes shortcuts to digital TV, the USB reader and settings, and you can add icons to any input you choose, complete with labelling such as Blu-ray and games.

The remote plays its part in this easy life, with a dedicated 'Home' button alongside the play/ff/rw keys for USB video and a Blu-ray player, plus shortcuts to picture and sound settings. It's flimsier than most Philips remotes, but it's typically functional and remains a class above most of its rivals.

Setting up Freeview channels is a cinch; the set tunes them all in within a couple of minutes. There's a simple eight-day EPG and a 'Watch TV' icon on the 'Home' screen makes this commonly used function easy to access.

Scenes from our Blu-ray test discs do reveal some impressive black levels that help to create extra realism. However, there's a modicum of picture noise in dark areas, though it's never serious and nightclub scenes from Trainspotting on Blu-ray remain unusually clear.

While very effective at removing the irritating 24p judder so endemic to the Blu-ray format, and adding incredible depth to what are always super-clean and highly detailed pictures, HD Natural Motion does go a bit too far on the 32PFL7404.

The side effects are costly; flickering around moving parts of the picture gets more distracting on this set than on Philips' pricier TV.

Even with the processing set to minimum, a test scene from Trainspotting highlights the problem. As Renton looks through his binoculars, flicker surrounds the park's joggers, while Sick Boy's waving rifle is obscured by similar artefacts and some blur.

The infamous bar brawl scene also reveals the positive and negative sides of the TV's processing. As Begby holds court, the camera pans back and an almost 3D-like scene is created, though his jerky head movements are plagued by flicker.

Problems aside, HD Natural Motion is occasionally worth persevering with, although the 32PFL7404 has plenty of other skills. Its 100Hz Clear LCD feature gets rid of blur; there's hardly a trace of it even during high-octane scenes, such as the movie's fast-paced intro sequence.

The 32PFL7404's sound quality isn't a patch on bigger sets from Philips, but there's plenty of clarity to both sound effects and dialogue, as well as a useful 'pretend' surround sound option that does improve the ambience of movies.

While it's a more basic offering with less star quality, it's arguably more proficient where it counts, more polished in terms of usability, and more solidly made than other brands at this price.