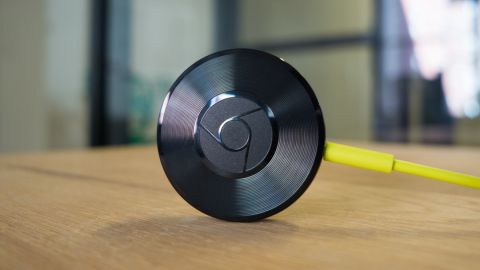 Those who haven't used Google's Chromecast before will likely gush over how easy it is to set up this small, unassuming device. But for those who have used the HDMI dongle, it should come as no surprise. Whether you're setting up via smartphone, tablet or a computer equipped with Chrome, Google makes it as simple as it should be to get listening.

With a low barrier in terms of technical skills and cost required upfront working in its favor, Google's Chromecast Audio also gets points for working reliably over wireless while still providing high-quality, skip-free playback from your device. In my experience, Casting content also sips on my device's battery at a much slower pace than Bluetooth does by comparison.

I tested the Chromecast Audio out in my apartment with a few different speaker systems. First was my entertainment center where I use the JBL Spot 2.1 speaker system. The music streaming device shared a 3.5mm splitter with my record player, so that I could play from each source without having to mess with cables and everything went just fine.

Next up, I moved the Chromecast Audio over to yet another JBL 2.1 system, the Pebbles. These, unlike the Spot, are USB-powered. Even so, the wireless music dongle worked like a charm.

Lastly, I hooked up the Chromecast Audio to a couple of Bluetooth speakers that I'm particularly fond of, the Harman Infinity One and UE Boom. I'm fully aware of the redundancy here, as these speakers already have wireless capabilities. But as I stated earlier, Wi-Fi is easier on my smartphone's battery and works more reliably than the Bluetooth signal does.

Not just that, I prefer the Cast experience over Bluetooth because it streams in the background, allowing me to make calls or watch YouTube videos while Casting to my speakers uninterrupted.

It also solves the awkward party dilemma many are familiar with. Someone says, "Pass me your phone so that I can find some music." Even if you say yes, you really wanted to say no. Thankfully, anyone under your Wi-Fi blanket can Cast music themselves to whichever speaker system the Chromecast Audio is plugged into. Problem solved.

Regarding the sound quality, it's excellent. Thanks to its fast connectivity, supporting 802.11 ac over the 2.4GHz and 5GHz bands, I didn't notice any sound degradation over wireless. If you're an audiophile with a library filled with FLAC tracks, you can rest easy knowing that the Chromecast Audio can process 24-bit file formats at a sampling rate of 96kHz.

I'm a user of both Spotify and Google Play Music and, thankfully, each works nearly flawlessly on Chromecast Audio. Of course, Google's own service has received the most straightforward Cast integration, but Spotify Connect is easy to use as well. One minor gripe with Spotify on iOS is that the volume rocker on my iPhone 5S doesn't affect the levels on the Chromecast Audio, though I'm sure a patch can solve this issue. I'll be trying out more of the supported services as more become available.

As stated earlier, Chromecast Audio works its Wi-Fi charm at a fraction of the cost as the next cheapest multi-room audio solution. But, the thing is, it can't do multi-room - not yet, at least. We've heard rumors that it will support the feature soon, but we've asked Google in the meantime to clear things up.

Much like Chromecast, Chromecast Audio rewarded users for hanging onto their older tech. It was a quick and easy solution if you're looking to inject some life into your wired speakers, and the investment was affordable, if nothing else.

Music lovers had little reason to resist Chromecast Audio and while we're certainly sad to see it go, Google now has a line of excellent smart speakers that it will be growing for the foreseeable future.