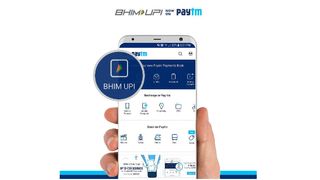 Popular wallet app Paytm has added BHIM UPI support for its Payments Bank service, allowing users to set up a UPI address for sending and receiving money. Paytm says that it “aims to be the largest issuer and acquirer of UPI” and given its large userbase and simplicity of opening an account, this does seem achievable.

How to use Paytm UPI feature?

Using UPI in the Paytm app is very easy – tap on the BHIM UPI icon on the app’s homepage and select your bank. The app will then ask you to verify your mobile number linked to the respective bank account. Once verified, you can then verify or set up a UPI PIN if it doesn’t exist already.

By default, Paytm allots a mobile-number@paytm UPI address, but if you want, you can also set up a custom UPI address. Paytm lets you setup up to 2 UPI addresses at any given point of time.

At the moment, the Paytm UPI feature is available only in the beta version of the Paytm Android app, but the company says that it will be available on iOS soon.

What is BHIM UPI?

BHIM UPI is a government-mandated payments platform that aims to simplify the process of sending and receiving payments. Instead of relying on comparatively complex and slower payment systems like NEFT, UPI makes the entire process simpler and faster. To transfer money, all you need is the receiver’s UPI address, which can be as simple as name@bank – you don’t need to bother about the receiver’s name, Bank name, account number or IFS code.

Further, with UPI, there’s no waiting tim, and with there being plenty of payment apps with UPI support, the entire system is much more smartphone-friendly.