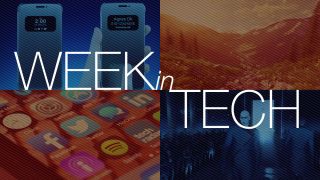 There's no such thing as a dull week in technology land: if someone isn't defacing your childhood by turning your favourite games into movies they're making ever-more-amazing smartphones, giving away game engines or just trying to fight online trolls.

We've seen all these things and more this week; in fact there's been so much news going on that the days have been blurrier than a Tim Cook iPhone photo. It's yet another action-packed Week in Tech!

It's been a rough week for Twitter, with uproar over its plans to make users' timelines a little more like Facebook. It's all about the numbers, as Michelle Fitzsimmons explains: "The social network saw no growth between the third and fourth quarter of 2015, staying flat at 320 million monthly active users."

One of the biggest headaches is Twitter's growing reputation as the place where people are abusive to others, and it plans to fight back with a 'superteam' to take down the trolls. The Twitter Trust and Safety Council are "anti-troll Avengers", reckons Hugh Langley, although as yet there are no details of how the Council will actually fight the abusers.

Facebook's Free Basics, its scheme to offer free internet access in developing areas, has suffered a blow in India: the Telecom Regulator Authority of India ruled that it wasn't welcome in the second-most-populous country on the planet. The issue is net neutrality, and the Authority reckons that Facebook's plans discriminate against the services that Free Basics doesn't carry.

All the pieces are falling into place: the Samsung Galaxy S7 and Galaxy S7 Edge will be launched at MWC 2016 on February 21, and we're getting a pretty good picture of what Samsung will be showing off. The S7 won't be among the cheapest phones launched this year, but it'll improve upon its predecessor with a flatter back, better camera and faster processor, as well as cosmetic improvements. There may even be a fully waterproof model, and a version with a truly enormous battery.

Samsung isn't the only firm launching a new flagship at MWC: LG's doing it too, and it looks like the LG G5 could be very tasty indeed. Leaked benchmarks suggest it's faster than the Galaxy S7, while the Always On display means you'll be able to see key information without waking the screen. Factor in a dual-lens camera for wide-angle shooting and you're looking at one of the most interesting smartphones we'll see this year. As ever, we've pounced on every leak and rumour to bring you all the details you need.

How not to Cook up your photos

How's this for awkward: you tweet a blurry photo from the Super Bowl and the internet calls you names because you're Apple boss Tim Cook and you're supposed to know how to use an iPhone. But such photo fails could happen to anyone – or at least to anyone who hasn't read our guide on how not to do a Tim Cook when you're shooting with a smartphone.

Amazon is getting into gaming in a big way: it's just launched a free, open source 3D game engine for developers based on Crytek's CryEngine. It can create games for PS4, Xbox One and PC, and it does VR too. Not only that but it's royalty-free, can integrate with Amazon's cloud services and the Amazon-owned Twitch, and has a clause in the small print that absolves it from responsibility in the event of a zombie infestation.

Reboots aren't just for superhero movies and recalcitrant PCs. They're for game franchises too, as Dan Griliopoulos explains: "I'm playing the new episodic Hitman, the first episode of the reboot, set around a packed French palais. After the poor reception of the recent Hitman games and the amazingly terrible movie, we've all been approaching this semi-reboot cautiously. On the showing of this smart set-piece and the huge array of ways to approach it, we can afford to be more optimistic… On the evidence of this hands-on, IO has fixed the problems of Absolution."

James O'Malley isn't impressed by the news of a Sonic the Hedgehog movie. "In an apparent bid to destroy the last vestiges of humanity's good will towards the Sonic brand, Sega's President and CEO Hajime Satomi has revealed that the company is working on a film featuring the firm's mascot," he writes, calling it "the future 'yet another disappointing video game adaptation'". The good news is that you don't need to hide from it just yet; it isn't out until 2018. You could always go and see the Angry Birds movie in the meantime.