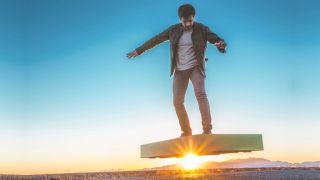 Developed by Acra Space Corporation and launching today, the AcraBoard only lasts for six minutes and costs more than some cars. But hey, it is at least a hoverboard that actually hovers over the ground, unlike the self-balancing scooters that most have started calling "hoverboards".

The AcraBoard manages to hover about 1 foot (30cm) above the ground using fan power in a board that resembles a giant Lego piece.

According to Acra Space, the AcraBoard has 272 horsepower and 203,000 watts of installed power that can take you to speeds of up around 20km (about 12mph) per hour, with sensors to help steadiness.

But weighing 180 pounds and needing a charge (which takes about 35 minutes) after just 6 minutes of action, along with a near-$20,000 price tag, means this hoverboard won't be on most people's wish list.

Instead, the company is positioning it as representing "the first revolutionary breakthrough in motion since the the bicycle, automobile and airplane."

As it does actually hover over the ground (presumably on nearly any surface) using 36 power fans, it seems close to what we'd expect from a true hoverboard, making it a little bit more impressive than the Lexus hoverboard, which requires a specially-built magnetic platform.

And while we're not quite where Back to the Future 2 predicted, we are 6 minutes and 180 pounds closer.

The AcraBoard goes on sale today, with shipments expected to go out starting April 2016. You can check out the AcraBoard in action below.