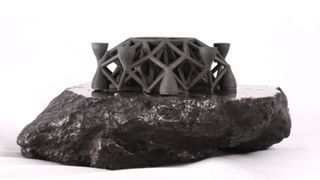 Planetary Resources and 3D Systems have for the first time used materials from a meteorite for 3D printing.

"It is the first part ever 3D Printed with material from outer space and is reminiscent of a design that could originate from a 3D printer in the zero-gravity environment of space," Planetary Resources said in a blog post.

Mining out in space

The powdered meteorite used to print the spacecraft prototype was composed of iron, nickel and cobalt, and was processed on 3D Systems' new ProX DMP 320 metals 3D printer.

Planetary Resources says "the future of space colonization and industrialization can now be visualized" with the development of the ability to 3D print using metals found in space.

The company hopes to one day mine near-Earth asteroids and is currently developing space exploration technologies.