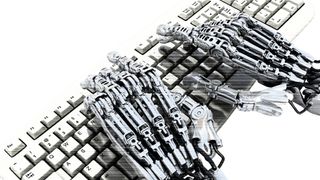 Laugh now but one day...

At Cambridge University, scientists are warning that there's a chance that AI computers will annihilate us all within the next two centuries.

A philosopher, a scientist and a software engineer – bear with us, this isn't a joke – have come together to suggest that computers are set to become Earth's dominant species.

Proposing that the threat of human extinction-by-robot is real and not just the remit of sci-fi and those who favour tin-foil millinery, the thinkers have founded the Centre for the Study of Existential Risk (CSER).

Huw Price, one of the co-founders and the Bertrand Russell Professor of Philosophy, reckons that this century and next are the crucial two, warning that we shouldn't underestimate artificial general intelligence (AGI).

He said, "It seems a reasonable prediction that some time in this or the next century intelligence will escape the constraints of biology.

"Nature didn't anticipate us, and we in our turn shouldn't take AGI for granted. We need to take seriously the possibility that there might be a 'Pandora's box' moment with AGI that, if missed, could be disastrous.

"I don't mean that we can predict this with certainty, no one is presently in a position to do that, but that's the point! With so much at stake, we need to do a better job of understanding the risks of potentially catastrophic technologies."

It all sounds rather far-fetched now, but then that's the point that Price is trying to make – it may sound unlikely that machines will usurp humans but we still ought to prepare for the possibility that they might.

Also involved in the project are Lord Martin Rees, professor of cosmology and astrophysics, as well as Jaan Tallinn, a software engineer and co-founder of Skype.

Cambridge says that "luminaries in science, policy, law, risk and computing from across the Universtiy and beyond" are queuing up to get involved, including representatives from Oxford, Harvard and MIT on the list.

Considering we have surrounded ourselves - literally - with high-functioning technology and that's set only to grow, it's pretty scary to think that one day it could potenitally turn on us.

We may have control over the machines for now but we'll be keeping a close eye on them, that's for sure.