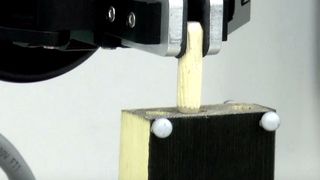 Many humans find assembling flat-packed furniture tough, but their difficulties pale in comparison to the challenge the same task poses to a robot.

A team of roboticists at Singapore's Nanyang Technological University are trying to teach a robot to build an IKEA chair, but it's proving to be slow going.

It turns out that putting together IKEA furniture requires a grab bag of skills that robots seriously lack. It requires the ability to locate and pick up small components in a pile of others, the ability to accurately manipulate objects and combine them, and the ability to operate in a messy home environment where a chair is usually assembled.

Don't Try This At Home

The robot that the team is using has two arms capable of six-axis motion, each with parallel grippers that can pick up objects. Arms of this type are very common in industry, so it's hoped that any lessons learnt will be widely applicable, but it seems they're not the most optimal tools for this job.

So far, their robot has completed only parts of the process. The biggest success was getting it to insert a small dowel into a hole in another stick of wood - a task you can see it performing above. By breaking the insertion process down into smaller sub-steps, it was possible to pick up the dowel, locate the hole and then place it inside.

Despite the difficulty, the researchers say they won't give up. "This work will continue until completion of all the tasks required for assembling an IKEA chair," they told Technology Review. Details of their progress to date have been published on the pre-print arXiv server.