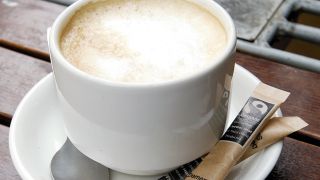 Another week, another fantastic discovery -- have we finally found the magic cancer-killing bullet? Maybe, but if not, perhaps we can just 3D-print new replacement organs instead.

We've even got bacteria that can make gold to help us pay for it all, which we should celebrate with a diet vodka-coke for a quick alcoholic hit. Plus, how much caffeine have you had today? It could be lethal.

How much caffeine is too much? -- You wake up, sluggish and tired, until you can get your caffeine hit. You reach for a coffee and everything is better, but is it dangerous? You might be surprised to learn that the accepted safe level of caffeine is actually only around 400mg a day. A small coffee could contain as much as 133mg, where as a Venti from Starbucks, for instance, is a whole 400mg of caffeine on its own. There's been spate of seemingly fit and healthy people dying from heart attacks recently, possibly brought on by very high levels of caffeine. Perhaps it's time to cut down, just a tad? [CEN]

Just for the alcohol intake, diet Coke -- Caffeine gets you through the day, but at night, you're after something a bit stronger. You're watching your weight, though, so what do you have with your double vodka? Diet Coke, of course. Thing is, a recent study has shown that diet mixers actually allow alcohol to be absorbed more readily into the blood, meaning you feel the effects quicker. So, you might be watching your weight, but you're getting intoxicated a lot faster than your full-fat-sipping friend. [Alcoholism]

Need a replacement organ? Just print one out -- Everything seemingly damages your health these days, but what if you could solve aliments by just printing out and swapping in new replacement organs? The surgery might be there already, but now scientists from the University of Edinburgh have managed to actually 3D-print stem cells. The theory is that you print out an organ using the stem cells, matching your own body's template, essentially printing replicas of your own organs. This could be the holy grail of organ replacement, print, grow, insert, and be as good as new. [New Scientist]

Red-green colour blind? Should have gone to Specsavers -- About 10 per cent of the male population can't differentiate between red and green due to a genetic defect in the cone cells of their retinas. Now scientists have created lenses that let the red-green colour blind see normal colours. One downside is that it makes yellows almost invisible, which wouldn't be great for driving, but one day, if we can't fix the genetics, we'll be able to just wear contacts instead. [Scientific American]

Have we finally found the magic cancer-killing bullet? -- The longer we live the bigger the cancer threat becomes. It's tough to kill because it's actually your own cells rebelling against your body, so you end up killing your normal cells in the process of treatment. A new, tiny molecule, called TIC10, has been found to successfully cause cancer cells to commit suicide in a whole variety of cancers, including brain tumours, in mice, without affecting healthy, non-cancerous cells. There's a long way to go to prove it works just as well in humans, but TIC10 could be the revolutionary treatment we desperately need to beat cancer. [Nature]

Feeling sick? Blame the vegetables -- Contrary to popular belief, a new study has shown that the majority of food poisoning is actually caused by vegetables, not meat. 51 per cent of food-borne illnesses reported to the CDC in the US every year are caused by contaminated plants. In fact, every kind of meat bundled together only caused 22 per cent of sicknesses. The main culprits of leafy-green contamination is the delightful norovirus family, responsible for what's commonly known as 'stomach flu'. Not something want messing up your insides, so best cook those veggies thoroughly next time you're feeling in need of greens. [CDC]

It's all yellow -- Alchemists have been trying to turn lead into gold for centuries, but the reality is we've been stuck trying to haul it out of the ground. Now bacteria might do it for us. Two bacterium have been found to be able to actually produce gold particles out of a gold solution, essentially growing gold nuggets if given long enough. Scientists think bacteria could be the next gold prospectors, automatically sifting through waste mine water and building gold nuggets for us. Bugs literally making us rich. [NCB]

Super lightweight and 15 times stronger than steel -- Scientists from Southampton University have developed a new super material that's incredibly light and 15 times stronger than steel. The new silica nanofibres are so thin that they cease to be brittle and, in fact, become stronger and more flexible. By forming them into nanowires, they show incredible strength and lightness, creating something that could revolutionise aviation, marine, and any application that requires an extreme strength-to-weight ratio. In fact, even your phone could eventually me made of silica nanofibres, because ultra-lightweight and strong makes for super-skinny phones. [Lab News]