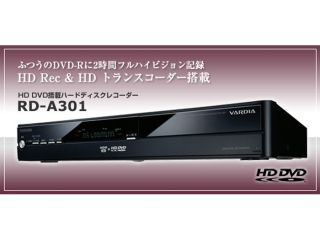 Toshiba's RD-A301 could be the breakthrough that HD TV needs

High-definition video recorders, whatever their stripe, are all very well, but wouldn't it be nice if they could use good old cheap DVDs instead of the costly new HD DVD or Blu-ray disks? Well, dream no more - from tomorrow we'll be able to order Toshiba's new Vardia recorder that can do precisely that.

The ¥99,000 (£420) Vardia RD-A301 hits pre-order in Japan tomorrow and will ship there in mid-December. When it does, it will bring with it the handy ability to record broadcast HD TV onto a standard DVD-R.

Using a transcoder that converts high-definition MPEG-2 broadcasts to the smaller MPEG-4 AVC format, the A301 can fit two hours of full quality HD TV on a conventional 4.7GB DVD. We've already seen the transcoding technique used by Panasonic in one of its Blu-ray machines, but that still requires the costly next-gen disk.

The recently industry-approved HD Rec function is flexible too, as it allows high- and standard-definition recordings to share a single disk and can be used to record to the built-in 300GB hard drive. At maximum compression, the drive can hold up to 159 hours of HD TV, while a single-layer HD DVD-R disk stretches to seven hours.

Other features of the A301 include dual HD tuners for recording simultaneous high-def broadcasts and the ability to transfer digital VHS recordings via a FireWire connection. Lastly, at just 69mm tall, the new recorder is considerably smaller than many of the next-generation machines it's likely to compete against.