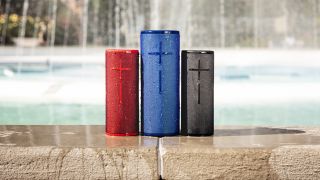 Ultimate Ears has been releasing speakers that usually spearhead our list of the best Bluetooth speakers in India. Once again, a well-deserved successor to the UE Boom 2  has arrived in the country. The Boom 3 is now available in India.

The UE Boom 3 offers a fresh take on a similar cylindrical design, with a new lineup of vibrant colors and premium texture. It also retains the water-resistance properties of its predecessor with an added dust-resistance on top, which bumps up the rating from IPX7 to IP67.

This is thanks, in part, to the durability of the swanky new material that encompasses most of the units – “high performance fabric, engineered for applications like motorcycle jackets and fire equipment”, according to Ultimate Ears.

The company has also added a new 'Magic Button; on the top of the speaker, which lets users play, pause or skip the music similar to the way some in-line remotes behave for headphones.

The same 360-degree sound projection returns with the pair, but this time Ultimate Ears promises that the Boom 3 comes with a “deeper bass and improved clarity over the original Megaboom”, offering an overall warmer sound signature.

The speaker also allows one-touch access to all your favourite playlists on Apple music using the BOOM iOS mobile app. Users can also use the Magic Button to access their playlists on Deezer Premium—which offers 53 million tracks—on Android and soon on iOS. The company says more music streaming services will be added soon.

As for power, both units will be compatible with the Ultimate Ears Power Up charging dock (sold separately) which was introduced alongside the company's Blast and Megablast smart speakers.

One of the much needed changes include the relocation USB port from the bottom to the side of the units means they can now be charged while standing up.