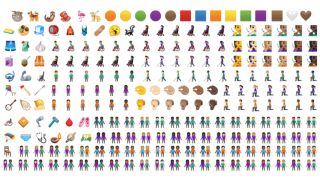 We've known that a new slate of emojis are coming to smartphones toward the end of the year, and mere hours after Apple showed its take on them and announced when it'd range them on its phones, Google has done the same.

In February, the Unicode Consortium unveiled what the new icons would be allowing Apple and Google (as well as others) to go away and develop individual looks with unique aesthetics. While we knew what the emojis would be, we didn't know exactly how they'd look on each platform.

While Apple's icons are a little blobby and 3D-like, similar to a cartoon, Google's gone for its flatter and more basic aesthetic, like stickers.

This year, the emojis focus on diversity and inclusivity with icons portraying disabled people, couples of all different genders and races. Plus there's also the addition of an adorable otter.

Apple announced it would release the emojis to its devices towards the end of the year, likely along with iOS 13 in September, and now we know Google will include the emojis in Android Q when that rolls out in August.

If that's the case, it seems Google will beat Apple in releasing the icons.

Apparently Apple was the company that petitioned Unicode to include the diverse emojis though. We've chosen a select few of the emojis from both Apple and Google so you can compare them.