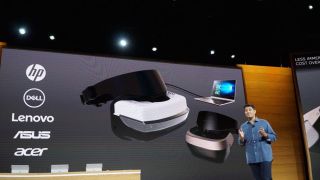 Though Windows may well be the lead platform for VR experiences outside of Sony's PlayStation VR push, it's only since this month's Surface event that it began to lay down its own supporting framework with news of its Windows Holographic VR platform.

While the HTC Vive and the Oculus Rift have their own software platforms to support their headsets, next year's Windows Creators Update will set the table for hardware from HP, Dell, Lenovo and other nascent VR manufacturers.

And now we now the minimum specs any PC paired with those forthcoming headsets will need to hit.

The latest builds of Windows 10 include the "Windows Holographic First Run" application, which is designed to ensure a user has a machine meeting the requirements of the VR headsets before splashing the cash. And they're mercifully basic.

To get onboard with Windows VR, you'll simply need:

Now, it has to be remembered that this will be lowest-common denominator stuff - you're not going to enter the Matrix with those specs.

But it's a clear indication of how far reaching Microsoft intends - and expects - its foray into virtual reality to be. It's already sewn up working on a desktop - it looks like Microsoft wants to make sure Windows is in every virtual office, too.