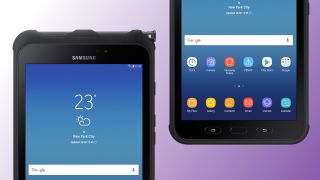 Unlike most Samsung products, this tablet, in particular, puts durability over design and hardware features. Targeted toward outdoor workers and B2B professionals, the Active2 rugged tablet will make for a competent option for those who have to deal with a risk of abuse at their workplace.

This tablet features an 8-inch 1,200 x 800 TFT display and an Exynos 7870 octa-core chipset with 3GB of RAM and a massive 4,450mAh battery powers the Android Nougat-flavoured experience. For storage, it offers 16GB internal memory and a dedicated micro SD card slot (up to 256GB).

Suited for use with gloves thanks to its physical navigation buttons beneath the screen, the Active 2 can withstand dust, water and drops at any angle thanks to its IP68 and MIL-STD-810 ratings. It comes with a rugged rubber casing that keeps the externals intact from accidental drops on any kind of surface. The Active2 also features user-replaceable batteries, so you can swap it out and change with a spare if required.

This model comes with an S-Pen, similar to the one we saw on the Galaxy Tab S3. It brings additional productivity features to the tablet, making it even more relevant for B2B industry. Since it's a rugged tablet, it comes with a slight compromise on the display and design. Don't expect Galaxy Tab S4 like thin bezels and rich AMOLED display from this tablet. It shares less in common with the company’s slick lineup.

Same goes with the 8MP rear and 5MP front camera. They can be used to click decent pictures for a rugged tablet, but don't expect it to be a reliable photography device.

However, it gets all the necessary connectivity options like single Nano SIM, WiFi, Bluetooth v4.2, USB Type-C, POGO pin for charging and keyboard, NFC and Wireless mirroring. It also has a fingerprint sensor and face unlock for security first level security.

In terms of availability, Samsung Galaxy Tab Active2 will be available in India from mid-March 2019 at a price of Rs 50,990.