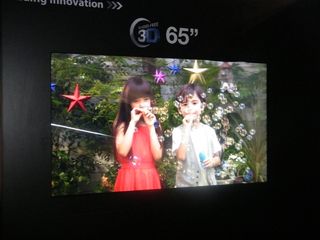 Has Toshiba stolen a march on its rivals in the glasses-free 3D space?

Despite the billions of pounds that the big manufacturers have collectively invested developing and marketing 3D products, many people are yet to be convinced that 3D is worth paying a premium for.

While 3D is undoubtedly impressive, the glasses are seen by many as a bit of a barrier, and so glasses-free lenticular 3D TVs are regarded as the holy grail of the industry.

They use a special filter over the top of a super high-res display in order to create a parallax. In other words, each of your eyes see a slightly different picture without having to use glasses to facilitate the separation of the two pictures.

The result, in theory, is a 3D picture that's much more comfortable – and convenient – to look at.

Philips dazzled us with its lenticular prototype at IFA last year, and now Toshiba has become the first of the big names to break cover and launch a product.

Toshiba's flagship lenticular 3D TV is a 65-inch model, and it's joined by a 56-incher and a 20-inch unit. We'll focus mainly on the two big 'uns.

First, the good news. The problem traditionally encountered by lenticular displays is that if you move off-axis while watching, the picture becomes distorted because both of your eyes encounter scattered light from both pictures.

Philips' display was impressive, but as soon as you moved, the 3D effect was destroyed.

Toshiba's TV, though, is a lot more robust. You can view from almost any angle and still get the 3D effect. Even if you move from side to side or up and down, the ripple distortion is kept to a bare minimum.

The result is a picture that looks good, and we can imagine some people feeling quite comfortable with having this TV in their homes.

However, there's a but, and it's a biggy.

To reduce the ripple distortion, Toshiba seems to have sacrificed much of the depth that makes traditional 3D TVs so impressive. While the 3D effect is undoubtedly there, it's nowhere near as powerful as an active shutter or passive display.

Indeed, we'd go as far as to say the 3D effect was mostly underwhelming.

Another drawback is that while the panel underneath the filter has a 4096 x 2160 resolution, the perceived resolution each of your eyes see is nowhere near that high. It's not even anywhere near 1080p.

The truth is that it's impossible to really work out what the exact resolution of the picture is – Toshiba admitted to us that it didn't know what it was.

The result of this is that the panel lacked any sharpness, and what's more there were clear vertical lines on the display, betraying the presence of the otherwise invisible lenticular filter.

Toshiba assured us that when these TVs eventually go on sale, they'll be a bit better than these prototypes. But frankly, we reckon they'd need some fairly substantial improvements to make the products as good as even the cheapest active shutter TVs out there – especially considering the inevitable high retail prices they'll command.

The smaller 20-inch prototypes were a great deal sharper, but the 3D effect still lacked depth.

Toshiba is clearly very excited about these products, though. Despite having six of the bigger panels on display, it hid them in an enclosed area on its stand and forced punters to queue up to get in and have a look. Toshiba obviously wants to create some buzz and, in many ways, it worked.

However, we canvassed some opinions from some of the people who saw the TVs and the response was a bit lacklustre. The general consensus was that the TVs were impressive, but were not knock-your-socks-off amazing.

We very much look forward to testing the finished products, and we really hope that the final models are better.

So while we left the Toshiba stand a bit disappointed, we're very excited about the prospect of lenticular glasses-free 3D TVs. It surely won't be too long before the technology is mastered, and then maybe we can all learn to love 3D like the big brands want us to.