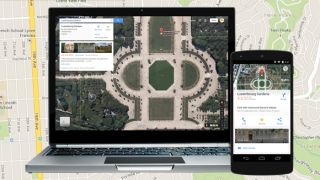 A new update to Google's iOS and Android Google Maps apps adds a flurry of new features, including some very interesting Uber integration, among other helpful additions.

Google Maps users with the Uber app installed on their devices can now compare their rides directly with public transit and walking routes "in some cities," Google Software Engineering Manager Jeffrey Hightower wrote in a blog post.

In addition, users can choose a destination in Google Maps, then jump straight to the Uber app with a single tap.

Those long-entrenched and violently stubborn taxi companies must really be loving this update.

This is actually the biggest Google Maps update in some time, and in addition to Uber integration it adds a number of features that make the app more useful for everything from driving to work to finding a place to drink.

For the former, the Google Maps app will now tell you what lane to be in, so you'll never miss a turn or exit. Alternate routes are now also easier to access.

As far as the latter, Google Maps now lets users browse restaurants, bars and other businesses by opening hours, ratings, prices, and more, much like Yelp.

Perhaps more importantly, the Google Maps apps now let you easily save maps for offline use by tapping on locations, opening up their info cards and selecting "save map to use offline."

Saved maps will sync between devices, so you can - for example - save every landmark in your foreign vacation destination in your browser, sync those saved maps to your phone, and then navigate them with data turned off to avoid roaming charges once you get there.

They've even added interiors to some locations in Street View mode so you can explore inside before you arrive.

Finally Google Maps now has improved transit directions, according to Hightower, whose name is straight out of Game of Thrones.

He wrote that Google Maps now features over a million public transit stops, and users can now specify when they want to depart or even choose the "last train home."