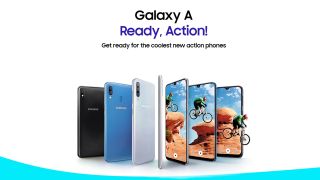 After weeks of rumors and leaked pictures, the refreshed Galaxy A series by Samsung was teased on a Samsung India microsite. Earlier last week, it was revealed through a couple of picture leaks that the Galaxy A50 will come with the triple cameras and the Galaxy A30 with dual cameras.

On Monday, a microsite for the A-series went live on Samsung India giving us our first look at the upcoming smartphones. Samsung has made sure not to spill enough beans as far as the specifications of the phones go. In any case, we have our first official look at three smartphones that are going to launch in the next couple of weeks in India. If you go by the rumors, it will be as soon as February 29.

Through the Samsung Galaxy A-series microsite, we now know that Samsung is prepping three phones for the refreshed lineup. We think that the phones in the image are the Galaxy A10, Galaxy A30 and Galaxy A50. We’re basing this merely on earlier leaks which revealed most of the specifications of the three phones. Couples that with the fact that the phones in the image feature single, dual and triple camera setups, it could be very possible that these are in fact the Galaxy A10, A30 and A50.

Earlier reports revealed some of the key specifications of the three smartphones, some of which are corroborated through the information available on the microsite.

The Galaxy A10 is the most affordable one out of the lot and features a 6.2-inch HD+ display. It has the infinity-V waterdrop style notch design on the front and is powered by Exynos 7884B SoC with an octa-core CPU. The A30, on the other hand, has a slightly larger screen estate at 6.4-inch and a better display quality as it features the AMOLED panel with Full HD+ (2340 x 1080 pixels) resolution. It’s powered by Exynos 7904 chipset and has a primary 16MP camera with a 5MP secondary ultra-wide camera which is in line with the microsite teaser.

Samsung Galaxy A50 has the same display as the A30, flushed with infinity-U notch design which is a first for the company. The three cameras on the A50 include a 25MP primary, 5MP depth-sensing and an 8MP ultra-wide angle camera. It is powered by Exynos 9610 chipset with an octa-core CPU and allegedly also features an in-display fingerprint sensor.

All the three phones are expected to have a 4,000mAh battery but only the Galaxy A30 and Galaxy A50 will support fast charging.