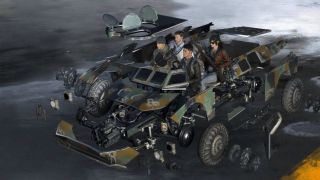 PUBG Mobile is due for an update to version 0.15.0, which starts rolling out from October 16. The social media handles of the popular battle royale game have been teasing some of the new features that will come to the game, such as the BRDM-2 vehicle and ledge grab mechanics, among others.

Now we have a complete list of everything that's coming to PUBG Mobile with the 0.15.0 update, and it looks like a major update. Some of the new additions include the ability to ride a helicopter, revive fallen teammates, rocket launcher, air raid, to name a few.

Tencent seems to have acknowledged the heat it faces from the recently released Call of Duty Mobile, which surpassed 100 million downloads in the week of going live.

Here's everything you should know about the new features coming to the battleground.

With the new 0.15.0 update, PUBG Mobile gets a new Payload Mode. In this, players can fly a helicopter from the helipad and engage with enemies from the air as well as while on land. Also, now players can revive their fallen team members by picking up their ID cards and going to the communication tower.

Additionally, players will be able to call in an airstrike over hostile territory to quickly eliminate enemies and repair damaged the health of vehicles.

The iconic Desert Eagle makes its way to PUBG Mobile and will be the pistol to inflict maximum damage with the highest bullet speed. The gun uses .45 caliber rounds and has a damage point of 62 and is compatible with the red dot, holographic, and laser sights in addition to different magazines. It will be spawn on all maps.

PUBG Mobile gets a new vehicle- the BRDM-2, which can be used both on land and water. It replaces the armored UAZ, which drops in by firing a flare gun. According to the developers, it is more durable and the tires are bulletproof.

With the addition of this feature, players can hop building and climb ledges mid-air. It will give them access to previously inaccessible spots in the game. A player has to tap the jump button twice for making the ledge grab work.