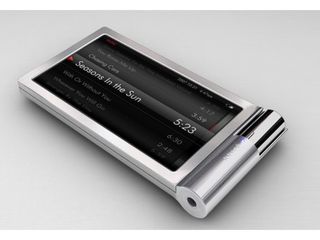 It's gorgeous, mysterious and shrouded in secrecy but we want one now

The latest CES lust-bauble we just caught a glimpse of is a fully loaded PMP from iRiver. Rather implausibly called the Spinn, it promises some serious functionality to go with its super-sleek design.

The compact media player lets you 'flip' pages intuitively with the help of its touch screen and iRiver's Spinn-branded interface. It sports a brushed silver finish around a 3.2-inch WQVGA screen offering a 480 x 272-pixel resolution.

What, no kitchen sink?

In addition to music, video and photo support, the player has a built-in FM tuner, voice recorder, text viewer, support for Flash games (although none will ship with it) and a tuner for the DMB flavour of digital television.

As if that wasn't enough, the Spinn will also feature stereo Bluetooth to eliminate the need for wires. So far, there's no word on pricing or availability nor is there even a website we can point you towards. But we do know it'll come in four capacities: 4GB, 8GB and 16GB, so we're guessing it'll max out at around £180 or so.