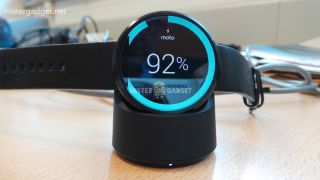 We're pretty certain that the Moto 360 is close to launch - we recently glimpsed some press shots, which is a telling sign - but Motorola's keeping quiet on a few of the essential details.

However the latest batch of pictures answer a few of our burning questions. They were leaked by Mr Gadget himself (Inspector Gadget was already taken), and include some shots of the watch docked into the previously-secret wireless charger.

This is the first Android Wear smartwatch to go wireless (the G Watch is only half way there), which is why we've been champing at the bit to discover the secret sauce that Moto's been teasing for so long.

As you can see, the cradle keeps the watch upright and facing outwards, allowing you to keep an eye on the display and the juicepower status.

The images also show the back of the smartwatch, explicitly listing an "optical heart rate sensor", which is news to us. There's also mention of "wireless charging", a "pedometer" and an IP67 water resistant rating.

But perhaps the best news is that it confirms the watch is "stainless steel", dashing rumours that Motorola may have fallen back on a plastic design.

As Mr Gadget notes, the Moto 360's round shape will require Android Wear apps to be tailor made. He adds that the Wear Mini launcher, for example, currently doesn't work with Motorola's offering.