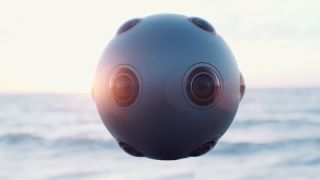 While it looks more like something you might use to occupy your canine companion, Nokia today announced a curious little device that could see a massive upswing in the volume of virtual reality content.

One particularly useful function offered by OZO will be real-time 3D viewing through a VR headset. OZO won't require any image assembly.

The first of many?

OZO will also knock together a low-res version of recorded footage in just a few minutes, which will be handy for filmmakers who want to make sure they have what they're after in the can.

The OZO will be the first VR camera to be made commercially available. Nokia claims it was designed and built for professional content creators, while suggesting there's more to come – it seems OZO is the first in a whole portfolio of devices Nokia has planned.

Pricing and final specs are yet to be announced, but Nokia is aiming to release OZO in the fourth quarter of 2015.