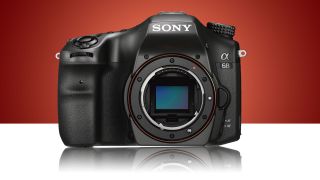 Sony's SLT (Single Lens Translucent) cameras look and feel like DSLRs but have a key difference – the mirror is fixed and doesn't flip up and down. Instead, its translucent surface feeds the image both to the sensor at the back of the camera and its dedicated autofocus module in the base.

This system is designed to combine efficient full-time phase-detection autofocus, which traditionally needs a separate dedicated AF module, and full-time live view for composing images on the rear LCD or in the electronic viewfinder. This is something that regular DSLRs can't do but Sony's SLT design can.

But recent advances in on-chip phase detection in mirrorless cameras have left Sony's SLTs and the translucent mirror format looking like an evolutionary dead end. Nevertheless, Sony is persisting with this design, selling it alongside its fully-mirrorless models like the A6000, possibly because it has already committed to a range of lenses for these cameras – there are no fewer than 34 Alpha lenses in the range now, according to Sony.

Where does the Sony Alpha A68 fit in?

The new A68 sits between the advanced A77 II model and the entry-level A58. In reality, though, it's probably closer to the A77 II model, borrowing that camera's 79-point 4D Focus system and 24-megapixel APS-C sensor, with an ISO range of 100-25,600 and BIONZ X processor.

The 4D Focus system uses an array of focus points across the frame (two dimensions) and subject distance information (the third dimension) to offer predictive autofocus which works out where the subject is going to be, based on its movement over time (the fourth dimension). In fairness, though, you would have to observe that competing cameras with predictive AF systems also work in 'four' dimensions.

The new A68 doesn't quite match the A77 II's continuous shooting speed, offering a maximum of 8 frames per second continuous shooting – it's 12fps in the A77 II – but this is still an impressive shooting speed for an enthusiast-level camera, and one of the advantages of the fixed-mirror design. The rear screen on the A68 is smaller too, at 2.7-inches, and has a lower resolution of 460,000 pixels, which is relatively modest by today's standards.

Sony has yet to confirm pricing or availability for the new A68, so we'll bring more on this when we have it.