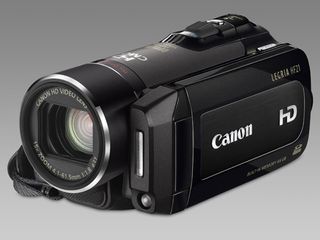 Canon is focusing on Flash technology for video recording, with the launch today of the HF21 and HF S11 camcorders.

Canon says that Flash memory is "the most reliable method for recording", with Flash recording being "faster, lighter and consuming less power than hard-disc drive based camcorders."

Both new camcorders come with 64GB of solid-state storage, allowing for up to 24 hours of continuous recording in LP mode (although you won't be able to find a battery that lasts that long).

The HF21 is Canon's flagship model, featuring dual recording to its 64GB drive or SDHC cards. It has a 10x stabilised zoom lens, an 8MP CMOS sensor and uses Digic DV3 processing. Naturally, it's a full HD model, with 1920x1080 files being captured at up to 24Mbps, and the option of 25p progressive for that filmic effect.

The HF21 has full manual controls including Auto Gain Control limits for low light shooting, zebra patterns and colour peaking to tweak exposure and a colour bar/test tone generator. The HF21 will ship from next month, price TBC.

Canon is marketing its other new model, the HF S11, as a family-friendly camcorder. A Video Snapshot mode allows four-second clips to be captured with a single press of the record button, then easily arranged into a movie and set to music (five tracks pre-loaded) on the camera, allowing clips to be assembled without the need for a PC.

Face Detection feature can detect up to 35 faces in a frame, and controls all the technical settings automatically to ensure friends and family's faces always appear clearly in the video. It is claimed to be able to select a single face to track in crowded scenes.

Tech-wise, the Full HD S11 has a 15x stabilised zoom and a 3.3MP CMOS chip. It too should be in shops from September, with prices to follow.