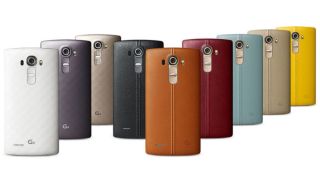 LG's next flagship handset is confirmed to be coming in the next couple of weeks, but a new leak has just revealed the G4 in full.

The phone was presented on LG's own site and picked up by Evan Blass, previously known as tipster @Evleaks, who linked to the site showing off the new handset clad in leather with a variety of colours to choose from.

The leak reveals six different versions of real leather as well as three plastic, but so far he hasn't mentioned the metal version that we've previously seen in leaks before.

There's no real reason to think there won't be a metal version, it just seems like LG is diversifying its design line up from the LG G3.

The leather colours are shown as black, red, purple, white, gold and a tan version as well, but LG hasn't revealed the colour choices for the plastic version just yet.

The leak also revealed the camera will come with a speedy f/1.8 camera helped by an infrared colour accuracy sensor, laser autofocus and a full-blown manual mode for those who know what they're doing.

Previous rumours and leaks have shown the phone will have a 5.5-inch Quad HD display, a replaceable 3,000mAh battery and a microSD card slot, although it's not certain how big this'll be yet.

It seems those who are looking to pick up an LG G4 next month will be spoilt for choice with most flagship design options we've seen in a long, long time.