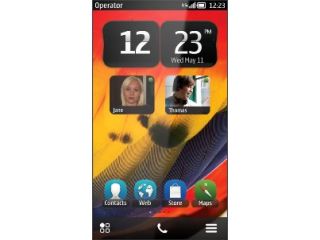 Getting up close and swipey with Symbian Belle

Nokia has shown off the latest version of the Symbian operating system: Symbian Belle, complete with some fancy UI updates.

The new version of the operating system has been unveiled at the same time as three new phones: the Nokia 701, 700 and 600.

The update we're most happy to see is resizable widgets, meaning we're not stuck with the same boring bars as before - this will make Nokia one of the few to have an OS running decent widgets, seeing as Apple seems so set against it.

That's not the only Android-esque element to Symbian Belle though, with a status bar that drags down from the top of the screen to let you know about missed calls and messages, plus access to oft-used apps.

Gotta talk about the beep

An ever present back key is prevalent at the bottom of the screen, enabling users to bounce back through their apps at will - why this can't be achieved with a hard key on the phone, we don't know.

NFC gets star billing as part of the OS update too - if you've got an NFC-enabled smartphone (which all three of the Nokia 700, 701 and 600 have on board) then you can share pictures and pair accessories easily with your buddies. We assume this is done using a Bluetooth connection, else the sharing speeds would be super low.

Another little update is the amount of home screens on offer, as you can now simply pop the number up to six if you're going on something of a widget frenzy.

We're not sure when this update is coming, but given Symbian Anna has only just landed to all and sundry we'd expect it to possible be the beginning of 2012 - a long time to wait if you're a huge fan of bigger widgets.

We've had a word with Nokia about getting some hands on time with the new operating system, so stay tuned for our Symbian Belle review and fancy video to go alongside.

And lookie here! A video of the new OS in action, complete with lady voice for all of you lonely people out there craving both smartphone news and female attention - plus a more flashy and fancy one underneath:

What do you think about the new announcement? We've got a dedicated forum thread up and running - so head on over if you want to sound off about your love/disappointment in Nokia's announcement.