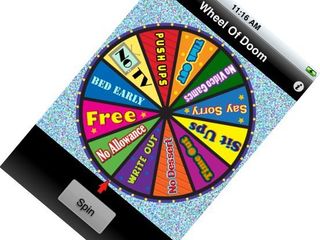 Is it just us, or are the colours a little TOO jaunty?

One Moxie Ventures has just announced the 'Wheel of Doom 1.0' app for the iPhone – which doles out punishment for misbehaving kids at the spin of a wheel.

One of the most ludicrous, yet amusing, apps we've seen announced in 2010 allows parent to be let off the responsibility of choosing a punishment by random selection.

Surprisingly options like 'lock you in the cupboard under the stairs' or 'send you to military school' are missing, but possibly more draconian alternatives like no videogames (noooooooooooooo!) and no television are.

"The app removes parents from the friction of the moment while making an immediate decision on an appropriate penalty for inappropriate behaviour," says One Moxie Ventures' release.

"Wheel of Doom takes it out of the parents hands, shifting focus for both parties, which may help provide a cooling down period."

But it's not all bad news kids, the Wheel of Doom application also has one 'free' slot, giving the offending child a second chance if they spin the wheel and happen to land on it.

"Naturally, it is up to the parents to enforce the determined penalty but they are only carrying out the Wheel of Doom's instructions," adds the release.

"Kids can blame the app instead of harbouring negative feelings about their parents. That alone, is worth a lot."