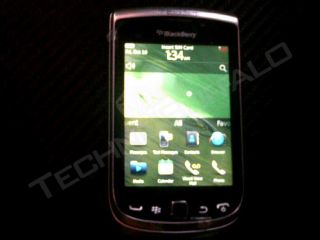 The BlackBerry Torch 2 has hit the catwalk once again, being papped in fairly low quality showing off its shiny new back plate.

It doesn't look like this metal (?) back panel is made of the same cross-hatched glass that the Bold Touch 9900 is rocking; in fact, it looks a bit low-rent for RIM's premium agenda.

But, having been so fashionably late to BlackBerry World that it missed the entire convention, the BlackBerry Torch 2 is yet to get its official reveal so we know nothing for sure.

That hasn't stopped the handset sneaking out into the wild in photos and revealing its secret specifications in a half-hearted hands on.

These include a 1.2Ghz processor (likely to be a single-core affair but still double that of the original BlackBerry Torch), 512MB of RAM, Bluetooth 2.1, a magnetometer and an accelerometer.

The Torch 2 will probably also come with BlackBerry 7 OS, designed for the greater processing horsepower of the 1.2Ghz chip but sadly not making its way to older RIM-made smartphones.

Don't forget to vote in the TechRadar Phone Awards to be in with a chance of winning one of 13 top end smartphones!

From Technobuffalo via PocketNow