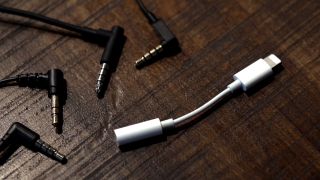 The saga of Apple reportedly removing the 3.5mm headphone jack from the upcoming iPhone 7 is a long and ongoing thing, filled with increasing reasons to believe the old-school prong will be eked out in favor of the proprietary Lightning connector.

"But how will I listen to my jams with my current set of headphones?" you wonder. "Surely there's some kind of adapter, right?"

Those specific fears may be assuaged, as a video shows off a 3.5mm-to-Lightning dongle that could wind up as Apple's official solution to keeping your old 'phones in use, as found via Mashable.

The adapter does have enough of that Apple flavor to seem legit, but there's still no confirmation if the device is an official product - or if Apple really is dropping the headphone jack at all, so take this information with a low sodium count's worth of salt.

Some big questions remain on our brain, though. Primarily: If this is for real, will an adapter come packed-in with the iPhone 7?

If not, will Apple give them away to legacy iPhone owners à la how Microsoft is handing out Kinect adapters for the Xbox One S? If not that, how much can we expect to spend on a simple end-to-end adapter?

Finally - and a big one for Apple to address, in our opinion - is if there will be a solution that allows users to listen to their tunes and charge their phone simultaneously. I gotta have my ABBA when I work, but Spotify drains my battery, dig?

Hopefully, these questions and more will be answered by Apple later this year in time for the iPhone 7's official debut.