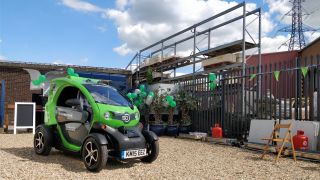 Autonomous vehicles are big business. So it’s no surprise that some of the highest-valued technology companies in the world are looking to get in on the action.

Giants like Uber, Tesla, Waymo, and Apple have all invested heavily in what they see as the transport of tomorrow: AI-driven cars capable of such precise steering and navigation that they’ll never need a human at the wheel.

If successful, such vehicles would free up time for human drivers, allowing them to sleep on long-haul journeys, finish typing up presentations on the way to work, or simply use their time as they see fit (so, Netflix).

Statistically, these self-driving cars should also be much, much safer. Autonomous vehicles (AVs) can use 360-degree cameras to assess the environment around them; they can use LIDAR sensors to bounce light off the terrain and build a 3D map of your surroundings, seeing further and better than the human eye; they can adjust their route and speed automatically depending on real-time traffic data or weather reports. And they’re only getting better at these things as time goes on.

But is the eagerness of the transport industry to get to ‘full autonomy’ as quickly as it can actually working out?

The gung-ho attitude synonymous with young, risk-taking startups is exactly what propelled so many of them to star status. Even small teams of engineers and programmers found they could become hugely disruptive forces through a willingness to take real risks, and respond to new challenges fast. But this ‘move fast and break things’ mentality doesn’t just risk capital.

In March of 2018, a self-driving Uber test vehicle struck and killed a pedestrian in Arizona. Just days later, a Tesla Model X SUV crashed into a highway barrier while on ‘Autopilot’ mode, collapsing the front half of the car and killing its 38-year-old driver. Both events attracted widespread media coverage.

While the proximity of the incidents is coincidental, they both suggest we’re at a  potentially worrying stage in the development of autonomous vehicles, which have seemed to reach a kind of public beta phase: they’re losing their training wheels, but they’re not fully roadworthy either.

AV technology is now advanced enough to see wider implementation, and to a certain extent real-life road testing will be necessary to further its development. But it’s much harder to defend a technical glitch when the result is a fatality, rather than damage to a crash-test dummy.

We spoke to the team at StreetDrone, a startup based in Oxford, UK building self-driving cars for use in research and testing environments.

This is a company more than familiar with the realities of motor transport and modern travel: its founding members include Formula One engineer Mark Preston and one of Expedia.co.uk’s earliest employees, Mike Potts. And their concern is that not enough time is being spent on the R&D phase of AVs before they take to the road.

“What we’re seeing is unfinished technology”, says Potts. “And there’s a real need for someone to help guide autonomous vehicles in their development.”

There are baby steps to be taken, and StreetDrone is working largely with UK universities – Oxford, Cambridge, Oxford Brookes – to use their expertise to ensure that technology works before applying it commercially, or letting it anywhere near high-risk environments.

"This is serious and we have to get everything right. Safety has to be our number one priority every time... but I think that's a good thing."

StreetDrone’s philosophy is very different to that of the mainstream AV industry, where a desire to get vehicles onto public highways means companies sometimes fail to implement the necessary safeguards. Uber’s collision in Arizona was eventually traced to the company overriding the prototype vehicle’s safety protocol, in order to prevent the car needlessly starting and stopping when it came near any obstacle.

Streetdrone’s ambition is to continue developing the sensors and machine learning of today’s – admittedly still nascent – driverless cars, until we’re able to implement them in wider society without incident. As Adrian Bedford, StreetDrone’s Head of Software says, “A silicon-based neural network should be able to do the processes of a human driver, and we’ll get there eventually.”

But, assuming that AVs eventually get to level 4 or 5 capability – the metric for automation that removes the need for human interference – where should we put them?

My way or the highway

“The idea that we’ll ever see 100% autonomy is fanciful”, says Potts. “The adoption of cars that can drive themselves will happen, but only if there’s clarity in terms of where they can be used."

“You can certainly see situations where you’re building a new motorway and you stick in an autonomous vehicle lane, and you won’t be able to use a non-autonomous car in that lane.”

Figuring out the best uses for AVs might be more productive than rushing to put them on public roads, where potential risks may outweigh the conveniences being promised.

Streetdrone is itself currently in talks with mining companies (it won’t say exactly who) to bring in its own AV solutions to operations, which would see unmanned vehicles check for blockages in tunnels rather than risking the safety of workers.

It looks like some of the most fruitful collaborations in the AV space don’t involve human passengers at all – and perhaps the future of the technology lies in knowing when to keep manual and automatic systems separate.

Back in 2016 we reported on the delivery startup Starship, which had developed a fleet of wheeled, autonomous delivery robots for short distance or ‘last mile’ deliveries of goods and groceries.

Despite garnering a good deal of hype for its wheeled alternative to Amazon’s planned delivery drones, and running trials in cities around the globe, the company had to rethink where it was actually productive to operate – finding that there wasn’t a need for another delivery service in streets that were already hugely congested.

In the UK, Starship has refocused its efforts on the more sparsely-populated town of Milton Keynes. Here, its robots could both travel more freely and give more benefit to local residents, who lacked easy access to grocery stores and food outlets.

A spokesperson for Starship said the locals had even started viewing the robots as community members, and would rush to assist one that had been knocked over or lost its way. While Starship has its own ‘rescue’ operations in place, it became clear that “people tend to help”.

While other sectors of autonomous transport struggle to integrate without incident, Starship have found that “Humans and robots can absolutely live together in the same space".

By partnering with local supermarkets and setting up a delivery network in a location that could really benefit – i.e. by being smart about where and how it operated – Starship managed to innovate in the transport space in a way that feels… personable.

Perhaps we need similar thinking to make sure recent, dangerous mistakes aren’t repeated, even if ‘full autonomy’ is still a while off.

Back at Streetdrone, Mike Potts is cautiously optimistic that autonomous vehicles will find their place in our transport networks. “But it’s a challenge that needs to be worked out, legislation-wise.”

And what challenges still need to be worked out?

“Well, as there aren’t any autonomous vehicles on UK roads: all of them.”