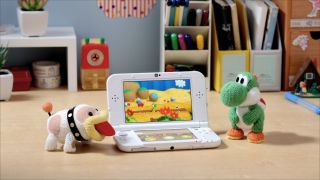 Nintendo of America may have a new president, but its approach to supporting the 3DS console is the same as ever: if you want it, we've got it.

During E3 2019, the new president, Doug Bowser, told Time that the handheld console "continues to do quite well" and is still in demand from consumers and retailers. For that reason, and quite possibly because Nintendo also sees the console as "a great entry point for young gamers", the 3DS will continue to see support.

And if you have any concern that the 3DS didn't really make much of an appearance during Nintendo's Direct at E3, don't fret. According to Bowser, Nintendo's focus on the Switch during the event wasn't a sign of bad things to come for the 3DS, it's just that it's not really the star of the show any more.

"At this point," he explained, "we have no games to announce on 3DS at [E3], and in fact we're not really showing 3DS content here, because it is all about Nintendo Switch."

Continued support for the 3DS is a promise Nintendo has been making since the Switch launched in 2017 and it has kept it so far. However, the last significant release for the 3DS was Persona Q2 and, with a sparse first-party release schedule for the future, it's worth wondering how long consumer demand for the eight year old platform can actually continue with so little to encourage it. It certainly feels like its life is petering out.

That said, the 3DS and its two-dimensional sibling are reliable consoles with a great and extensive back catalog of games to dig into and enjoy. Although the rate of new releases is slowing down, it's likely people will keep finding reasons to pick up a 3DS, even if it is just because they've been handed one by an older, Switch-wielding sibling. As such, Nintendo's continued support for the console can only be a good thing for itself and players.