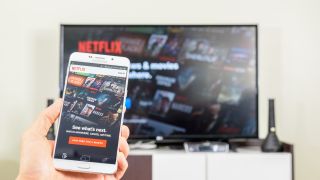 If you’re using Netflix, Amazon Prime Video, Hulu or similar TV streaming services regularly, you’ll likely have felt the tussle between different media competing for your all-important television time. Even if you stick largely to one TV platform, there’s then a whole news cycle around the show to keep track of and contribute to – not to mention the friends and colleagues you message about your new favorite – or least favorite – shows.

It’s no wonder some of us end up doubling up: texting and tweeting mid-episode, sharing videos of ourselves on the couch to Instagram, posting comments on every YouTube video we watch, and trying to stay as social as possible while being held hostage by various screens.

For Netflix in particular – a platform so associated with millennials hanging out that “Netflix and chill” has its own Wikipedia page – it’s highly possible we’ll see more built-in social features emerge, in order to enhance the viewing experience and keep users inside the Netflix platform, instead of letting them run off to other services (WhatsApp, Twitter, etc) to talk about what they’ve just watched.

We spoke to Michael Pazaratz, CEO of the social messaging app Rave, to find out whether more social features are going to be the way forward for these kinds of TV streaming services.

You, me, and the TV screen

If you're wondering what an app has to do with this, Rave was founded five years ago to try to bring more social features to today’s streaming culture.

The iOS and Android app essentially synchronises Netflix, YouTube, or Vimeo videos (or music tracks) between the smartphones or tablets of you and your friends, meaning you’re able to comment and respond to each other knowing you’re at the same place in a video – while also overlaying text comments on / below the feed.

But given the rapid move away from specifically timed broadcasts, and towards on-demand watching, that social element is harder to recapture than ever.

“You can now watch what you want, where you want, when you want,” he says. “There’s no longer a reason to gather around the TV at 9pm, if you can just binge a whole series on your iPad. And while this is broadly a good (and irreversible) phenomenon, it’s led to a shift from communal to solitary viewing, and something has been lost in the process.”

But how can synchronized videos and messaging features help? “Chatting by text or voice recreates the social dynamics of being in the same room. Sometimes it's enough just to know you're watching together.”

Naturally, any TV show with enough hype around it can get a large audience all watching as a new episode drops – whether that's online or terrestrial television. A study by electronics company Epson also found that over half of surveyed parents in the UK view TV watching as a social activity that "could help bring families closer together".

But for connecting on a wider scale, the act of commenting during real-time videos is one already gaining traction. Twitch streams, Facebook Live videos and YouTube radio stations all allow users to leave comments and reactions on what they’re watching, meaning viewers can engage collectively instead of a purely solitary experience.

It apes what’s actually a much more common phenomenon in China – where online videos will often include a stream of so-called ‘bullet comments’, named after the fast-moving projectiles that dominate the screens of Space Invaders-style arcade cabinets. These bullet comments are overlaid over the picture itself, rather than under or alongside it, with typed thoughts, reactions, emojis and exclamations from its various audience members all merging with the visual information happening onscreen (via LogicMag / @xuhulk).

As if someone texting in the cinema wasn’t bad enough, you might think – but it speaks to a wider trend of a generation raised on social media, understandably finding a purpose for those social features across all kinds of content.

According to Hannah Marcus, a strategist at media consultancy Discover.AI, things don’t end there either – with the rise of social viewing platforms that see people "writing and communicating directly over the content they’re watching, which has then mutated into formally interacting with the content itself (covering up shocking scenes with text, for example).”

Marcus adds that “the US and UK are getting better at dealing with multiple claims on their attention, as shown by the increase in subtitle usage and multi-language content [distributed through Western platforms]. But it is a far cry from this kind of collective multi-watching experience.”

What does this have to do with Netflix?

So far, TV streaming services like Netflix, Amazon Prime Video, or Hulu have been resistant to too many features that interrupt or distract from the content that viewers have come to watch – with many of us paying that subscription in order remove irritating ads in the middle of our shows.

But attitudes change, and Netflix is a company that has repeatedly shaken up its services in order to attract wider audiences, moving from a DVD rental service to a behemoth in online TV streaming a huge producer of original content.

The Netflix app also already allows you to "share" what movie or TV show you're watching to social media platforms – and has been testing out an "Extras" discovery feed that provides you information and trailers around your favorite titles. Why not bullet comments next?

“Without innovation, even the best products and business models reach their limits,” Pazaratz says, referring to the recent stagnation in Netflix’s subscriber growth. “While hot new shows are crucial, users are also looking for novel and enticing ways to enjoy them. With the competition heating up, if Netflix doesn’t innovate, others surely will.”

Ok, but... is this something we actually want?

Pazaratz is pretty adamant this is something viewers are pining for: “How many people go to the movies alone? Or a music concert? Entertainment has always been a social activity, and given the option, people choose to enjoy it together.”

However, that doesn’t seem to allow for those of us who like watching a few episodes of Friends by ourselves before bed, or even going to a cinema or theatre for the experience of some anonymity in a crowd. There are those of us who like to consume content in a more introverted way – away from the social pressure of discussion in more public forums like Twitter.

One of the strengths of Netflix is in how it focuses on the content you're watching, without ads to interrupt you or too much of the outside world getting in – unless you want it to, of course. TV streaming services may look to get more social in the future, but they'll need to be careful not to lose focus of why people subscribe – and become more focused on the social interaction than the TV shows and films fuelling it.