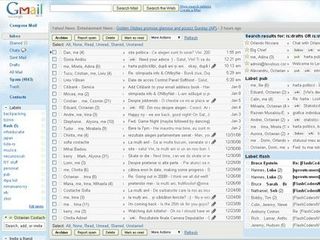 Use of webmail is in decline, with mobile mail sky rocketing in the past year, according to the latest figures.

ComScore's study of online behaviours in the US suggests a trend away from the internet for our mail, with a 6 per cent drop in usage year on year.

These figures include the likes of Gmail and Hotmail but not traditional email through programs like Outlook.

The decline does not mean that we are consuming less email, however, with a staggering 36 per cent more people stating that they used their phones to access email in a month than last year.

"Digital communication has evolved rapidly in the last few years with an ever-increasing number of ways for Internet users to communicate with one another," said Mark Donovan, comScore senior vice president of mobile.

"From PCs to mobile devices, whether its email, social media, IM or texting, consumers have many ways to communicate and can do so at any time and in any place.

"The decline in web-based email is a by-product of these shifting dynamics and the increasing availability of on-demand communication options."

The shift is apparently coming from the younger demographic, which suggests that this is a trend that may continue as our mobile phones continue to take over some of the functions that a PC has traditionally filled.