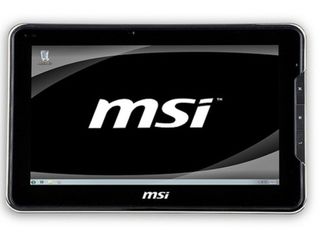 The hotly anticipated MSI WindPad 100 that surfaced in prototype form at Computex is another step closer to making its expected debut at IFA 2010, with the Windows 7 tablet design reportedly now finalised.

The world, and particularly Microsoft, is waiting for the arrival of a credible Windows 7 tablet to take on Apple's astute iPad.

With a number of manufacturers readying their versions, MSI's WindPad 100 is among those that has caught the attention with a 1.66 Atom processor from Intel, a 32GB solid state drive and 2GB of RAM.

Other specs include HDMI out, 2 USB ports and the WindTouch overlay on top of Windows 7 – which is already set up for touch.

German site mini-notebook-laptops.com has pictures of the WindPad 100, including the first glimpse of a dock, albeit not one with a keyboard.