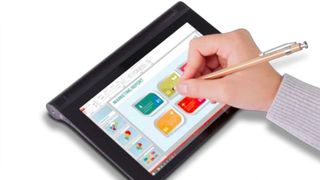 If you have ever lost your tablet's stylus before, then Lenovo has a open-ended solution for you and it's called the Lenovo Yoga Tablet 2 (8-inch) with AnyPen.

As the formal name suggests, any metal object can be used as a pen in order to control this 8-inch tablet that is a hair bigger than an iPad mini 3, but that Windows 8.1.

This specially-made Yoga Tablet 2 allows you to write and draw with a pen, pencil or, as Lenovo daringly says, even your keys or a fork That's gutsy.

Topping off its stylus versatility, the Yoga Tablet 8-inch can be used for ways with hold, stand, tilt and the all-new hang mode. We hope to get hands on with this at CES 2015 this week to see what that's like.

Lenovo Yoga Tablet 2's with AnyPen has specs that match other Windows tablets. It has a Full HD display, a 8-megapixel camera and dual front-facing speakers with Dolby Audio on the outside.

On the inside, it packs an Intel quadcore processor that Lenovo says is designed for "both work and play," and "extreme battery life."

In addition to running Windows 8.1 as its operating system, the 8-inch tablet comes with Office 365 and a one year subscription to Microsoft's online processing suite.

You can begin chiseling away at this adaptable tablet later this month, as the Lenovo Yoga Tablet 2 (8-inch) with AnyPen has a January 2015 release date.

That may be a small price to pay considering you're saving money on replacing all of those styluses.