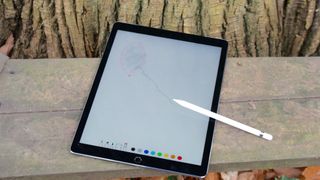 A smart hacker has managed to effectively give the iPad Pro pressure sensing 3D touch capabilities.

3D touch detects how hard a user is pressing on the screen - effectively enabling "right click" style gestures. For example, on the iPhone 6S a harder press on the camera icon doesn't just load the camera app, but shows a menu enabling you to skip straight to selfie-mode.

Sadly for iPad Pro owners it's currently only available on the Apple Watch, iPhone 6S and iPhone 6S Plus because it requires a special detection layer to sit beneath the screen.

But this hasn't deterred coder Hamza Sood, who has managed to create a 3D touch style experience by using the Apple Pencil, Apple's new stylus for drawing on the iPad Pro.

After jailbreaking iOS 9 and modifying some of the system code that underlies the operating system, Sood was able to use the Pencil's pressure sensitive 'nib' to detect how hard the user is pushing down - removing the need for a detection layer in the screen.

In a very basic proof-of-concept app, a video of which has been posted to Twitter, you can see the same button being used to execute two different commands depending on how hard the Pencil is pressed - and Sood has even coded it to work like the new "Pop" gesture on iPhone 6S, where the user can press harder on (say) an email in list to get a "pop up" near full-screen preview of the contents, without having to open it.

The code for the hack has been posted on GitHub if you'd like to take a look at exactly how he did it. But don't expect Apple to ever implement this sort of thing officially - not least because it would probably prefer to sell you an iPad Pro 2 with 3D Touch support next year instead.

(via Slashgear and 9to5Mac)