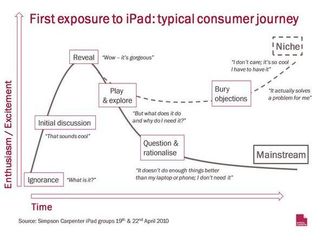 The iPad launches in the UK on the 28 May, with Apple already taking pre-order for its new slate device.

However, one British market research company is adamant that the iPad will not be a mass market computer in the UK.

His verdict? It's unlikely to go mass market. At least not yet.

Stevens is Director of Telecoms Media and Technology at Simpson Carpenter. He concluded, following on from his qualitative market research into the use-value of the iPad for Brits:

"When the iPhone was launched, it revolutionised an existing category that people understood. The iPad is at the vanguard of a new category that sits between the computer and the phone - so it's not surprising that many consumers struggle to see how it could fit in their lives.

"Niche groups with specific emotional or functional needs love it; but right now there isn't a compelling incentive to get mainstream consumers to buy it. Of course this may change once they see how early adopters use it - but in our view the iPad will take longer to achieve the sales growth and wider market impact of the iPhone.

"Of course an impulsive minority will simply have to have it. For them, it's not about function, compatibility or improvement but about raw appeal, its sheer magic. Typical of these consumers was this response "It's just fantastic. I don't need it, but it's wonderful and I want it."

This research does have to be taken with a large pinch of salt, however, due to the amount of people who took part.

Saying that, research groups do have more of a push when it comes to giving their say than a tick-box survey because they have actually played with the device.