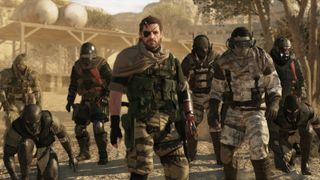 Metal Gear Solid is in a strange place. Its creator, Hideo Kojima, no longer works at Konami, but the publisher still owns the rights to the series. Konami is already hard at work developing Metal Gear Survive, a spin-off that takes place at some point between Metal Gear Solid V: Ground Zeroes and Metal Gear Solid V: The Phantom Pain and fills it out into a co-op zombie survival game.

Clearly, Konami is happy to keep developing the series so it’s only a matter of time until it sets its sights on a more full-blooded sequel, a Metal Gear Solid 6.

When Konami does start work on this successor, there’s a tonne of directions it could take the series in. The Metal Gear games don’t follow a strict chronology, with 3 and 5 taking place before 1, 2, and 4, so Metal Gear Solid 6's story could occur at any point along that chronology. It may even retell the events of earlier games like Metal Gear 1 and 2 in light of the revelations at the end of The Phantom Pain.

Since we're going to be exploring the story elements of the series, this page is going to be peppered with SPOILERS. You have been warned.

There’s as much sign of a Metal Gear Solid 6 trailer as there is a fully-grown man infiltrating a military base under a cardboard box. After all, Konami hasn’t even discussed the game publicly so a trailer or screenshot of it in action would be enough to leave the internet with a great big exclamation mark above its head.

No, we’re not likely to see anything of a potential sequel until after the release of Metal Gear Survive on February 22. We may get confirmation that the game is in development and maybe even a glimpse of it in action at E3 in June. More likely is Gamescom in August – it was there that Konami revealed Metal Gear Survive back in 2016.

It’s difficult to know when Konami would plan on releasing Metal Gear Solid 6. Unlike other major series, the Metal Gear games have never released to a strict schedule. There were seven years between Metal Gear Solid 4 and 5, and four between 3 and 4.

However, part of the reason for their long development times was the control Hideo Kojima had over the series, something that is rumored to be behind his exit from Konami. Without Kojima in charge, it may be easier for Konami to develop a new Metal Gear Solid game more rapidly than in the past – though what impact Kojima’s departure will have on the development is impossible to say.

Metal Gear Survive may hold clues to a proper sequel. The game is a perfect opportunity for Konami to tease new threads in the Metal Gear Solid universe, which a sixth entry could spin out into a new story.

Return to the sandbox

Ground Zeroes and The Phantom Pain saw a marked shift in the Metal Gear Solid format. In a similar way to The Legend of Zelda: Breath of the Wild, the games took the essential elements of the Metal Gear series and spun them anew within a sandbox environment.

A game known for enclosed environments where you had to identify and navigate enemy patrols, became an open space for you to assert control over. The change in philosophy rejuvenated the series and any sequel should continue that, better tying together the wealth of changes Metal Gear Solid 5 introduced.

First introduced in Peace Walker, the Mother Base meta game gave you something to develop between missions. By strapping Fulton balloons to enemy soldiers you could identify and pluck particularly able troops from the battlefield, deliver them to your base, and brainwash them to join your army. The more soldiers you had back at base the more you could expand your operations and abilities in the field. It was an ingenious system, giving continuity to your missions and actions in the open world.

It was such a central part to Metal Gear Solid 5 that it would leave a big hole if it were missing in Metal Gear Solid 6. There’s a lot of room to expand it, too, by adding new functionality to the base and creating new opportunities to bring your soldiers into the field. Who wouldn’t want to call in a helicopter loaded up with your mercenaries to help out in a mission?

Konami invested a lot of resources into Metal Gear Online, it was one part of Metal Gear Solid V that continued to be updated after the game’s release - even where there were obvious gaps in the game’s single player that could be plugged. *Cough* Episode 51 *Cough*. Any sequel would surely expand on Metal Gear Online. It is, after all, like it or not, where Konami can make its money with microtransactions.

Metal Gear Solid V ended with the revelation that you hadn’t been playing as Big Boss, but as a man who had been brainwashed and surgically altered to think and look like he was Big Boss. It was a leftfield twist but one that explains how Snake kills Big Boss twice in the Metal Gear games.

In the first Metal Gear, Snake kills the doppelganger (aka 'Phantom' Snake) and in Metal Gear 2 he kills the real Big Boss.

There are many places where Metal Gear Solid 6 could pick up the story but a likely candidate would be right after the events of 5, either as Big Boss establishing Outer Heaven, his renegade state, and developing the Metal Gear walking battle tank - which would give fans a chance to re-meet characters like Grey Fox and Dr Pettrovich, though from a new perspective; or, Konami could take the opportunity to remake the original Metal Gear games in the glory of the Fox Engine, giving players a modern exploration of the story first told on the MSX2 back in 1987.

Of course, Konami could go back earlier and tell the story of The Boss, Big Boss’ mentor, the mother of US Special Forces. In Metal Gear Solid 3 we’re given hints of her actions in World War II, leading the Cobra unit in the Battle of Normandy. It would be a pre-mech story, but it could be a great departure from the series norms if Konami wants to escape the shadow of Kojima.

While Konami disputes it, many people feel Metal Gear Solid 5 is unfinished. The game’s final mission, Episode 51, was literally cut from the game, so there is little resolution with Eli, Big Boss’ clone. At one point he steals a mech from your base and disappears and you just never give chase. While the The Phantom Pain’s collector’s edition revealed what would have happened in the cut mission, it would be great to actually be able to play that final part, and see Eli, the boy soldier become Liquid Snake, your nemesis throughout Metal Gear Solid 1, 2, and 4.

The rapid wrap up of Metal Gear Solid 5 also sees you given little time to process the news that you’ve played the entire game as a phantom of Big Boss, rather than the man himself. You’re told you will work together to establish Militaires Sans Frontieres but there are many questions as to how you’ll do this in a world where you’re already being hunted by multiple governments and Cipher, the enemy force driving events in The Phantom Pain. It would be good to see a sequel flesh out these major elements.

Hideo Kojima’s departure from Konami doesn’t have to spell the end for Metal Gear Solid, but if it’s going to continue its most famous series then it’s got a lot to live up to.