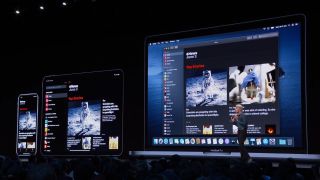 At WWDC 2019, Apple gave us our first official glimpse of macOS 10.15 Catalina, and as we expected, the new operating system for Macs and MacBooks will be able to run iOS apps designed for iPhones and iPad, thanks to Project Catalyst.

The idea is that it will be easy for developers to put their apps on iOS devices and macOS computers – as they’ll only have to create the source code for a single app – rather than having to create two completely separate apps.

The benefit for developers is clear: it will be quicker, simpler and cheaper to put their apps on iOS and macOS. No longer will developers need separate teams for creating iOS and macOS apps – now they only need one team. For some developers, that might seem more like a threat than a benefit.

For Mac owners, however, it’s a bit more of a mixed bag. Sure, it could mean you’ll get a range of new apps that might never have made it onto macOS without Project Catalyst. For example, Twitter is getting a native Mac app based on its iOS app. But, could the influx of apps designed for mobile devices end up making the app experience on our Macs and MacBooks poorer?

This is not about being a snob and looking down at iPhones and iPads – but there is a concern that Apple could inadvertently dumb down Macs by putting iOS apps on them.

Due to their size, battery lives and what we use them for, iPhones and iPads have lower powered components than Macs. That means apps designed to run on them are limited by the hardware. If a developer simply ports their iOS app over to macOS, the app may not take advantage of the extra power your macOS device has on tap – or at least it certainly hadn't been designed with that extra power in mind.

This could lead to apps that lack features or don’t perform as well with a mouse and keyboard – as their interface and features are likely aimed at touchscreens.

While Project Catalyst promises to allow developers to easily add Mac-specific features to their apps, and it would be nice to think that devs would still spend time to tailor the macOS version of their app to run on Macs, at the end of the day the amount of iPhone (and iPad) users in the world massively dwarfs the number of Mac owners.

For the vast majority of app developers, I fear that they wouldn’t find it worthwhile to spend too much time on the Mac app – and instead use their time and effort to polish the iOS app – then do a quick port.

And, I wouldn’t blame them. The numbers of users for each platform mean that approach makes sense, even if it does results in a compromised experience on Macs.

If Project Catalyst really does make it easy for apps to run on both iOS and macOS, then app developers will likely prioritize the iOS version of their app due to the larger install base.

Our concern is that this could lead to a situation where app developers cease making Mac-specific versions, leading to more limited iOS-centric apps dominating the Mac App Store.

Mobile apps on PC – do they really work?

Apple isn’t the first company to try to make mobile apps work on their desktop operating system. Both Microsoft and Canonical (the company behind the popular Ubuntu Linux distro) have attempted to make universal apps that work on both mobile devices and laptops and PCs. And, while their attempts were not successful, can Apple succeed where those two have failed?

The failure of Microsoft’s Universal Windows Platform apps and Canonical’s Ubuntu Touch initiative proves that creating mobile apps that can run on desktop operating systems is a tricky endeavor. However, it can be done. Google has managed with some success to bring Android apps to its Chrome OS software. If any company can match Google achievements in this regard, it’s Apple. But, should it?

What Apple showed at its WWDC 2019 keynote shows a lot of promise for iOS apps in macOS 10.15. Let’s hope that the inevitable influx of iOS apps does not result in a dumbing down of our Macs and MacBooks.