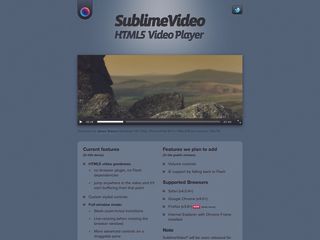 Visit jilion.com/sublime/video for a peek at a potential future for online video without Flash

In a recent article for A List Apart, Dan Mall likened the simmering aggression between advocates of Flash and those of open web standards to the Cold War. It's an appropriate comparison.

On each side, people bitterly oppose the 'rival' technology. Standards proponents claim Flash is resource-hungry, proprietary and buggy, and say standards should rule. Flash proponents argue Adobe's plug-in remains the only delivery option that offers cross platform consistency and that it provides scope for projects you can't create with open standards.

Political battles are also rife, notably between Apple and Adobe over the decision not to support Flash in Safari for the iPhone OS. And like in any parliament around the world, no one seems to agree on anything, spinning viewpoints until they're dizzy enough to vomit.

The standards camp claims a determined transition towards open web standards is necessary because Flash's install base is falling, as is demand. Tom Kershaw, Beam's senior art director, blames the decline of the microsite: "A few years back, a client would launch a new product and we'd make something cool in Flash. Now, clients aren't willing to spend that money."

Jeremy Jones, creative director at Digital Marmalade, adds that technical considerations are also a cause: "Clients have seized upon SEO, and a mantra of search engine optimisation is that Flash isn't search engine friendly. It's also viewed in a dim light as the awareness of accessible and standards compliant websites has increased."

Issues regarding performance on mobile devices (and Flash's omission from the iPhone) hasten this supposed dwindling, although Adobe counters that it isn't a decline at all. "Flash on internet devices isn't falling – it's in growth," claims platform evangelist Mark Doherty.

"Flash Player 10 was installed on 93 per cent of desktops within 10 months and, on mobile phones, we've shipped 1.5 billion devices with Flash Lite – that's 16 per cent of all mobiles ever built."

Doherty admits that "a few developers are reporting changes in client demands for Flash," but claims this isn't a reduction in usage per se – merely that demand for microsites is essentially being replaced by the need for animation, video and rich media apps.

Others aren't convinced. UX and interaction design consultant Faruk Ate likens Flash's current position to IE's some years ago: "Flash's installed base hit its peak when almost all browsers in use had Flash enabled – and most of them the latest version. Once you hit the top, the only way is down. The way down is ensured by open technologies catching up to its feature set and chipping away at the uses for Flash."

He thinks it will be increasingly difficult for Adobe to battle against this particular tide, especially if media buzz is heavily skewed towards 'poor performance' arguments.

Standards advocates rally against Flash too. Alistair MacDonald of Bocoup reckons that during a downturn, people are less likely to pay for a development platform, preferring 'free' technology such as HTML5.

Jeffrey Zeldman adds that Flash is simply not good as a 'complete' solution. "The all-Flash site has always been problematic and will continue to recede as more people access content via devices that don't support Flash," he says. "This doesn't mean no more Flash, just that you build the semantic HTML layer first."

Zeldman considers this shift a win for accessible standards-based design. Unless developers are happy to shut out millions of iPhone OS devices and desktop users who block Flash, they must adjust their methods, adding optional layers of Flash UX, in the same way that JavaScript UX improvements are added once a site works without them.

"Adding to the pressure is the fact that HTML5 does many things Flash does, and browser support is growing rapidly, including in devices that don't support Flash." Software developer Simo Kinnunen adds that if this thought pattern takes hold, the shift from Flash will quicken. "If you use a plug-in, people will expect something that justifies it – the result will have to be mind-blowing. Using HTML, CSS and JavaScript, you don't need the 'wow' effect so much."

FONT GAMES: Until recently, it would have been a no-brainer to use Flash to construct the animated iPhone at fontgameapp.com. This site, however, uses JavaScript

Ajax pioneer Thomas Fuchs goes further, claiming Flash is largely redundant. "It adds a layer of complexity, because it's self contained, and it introduces an artificial barrier. Although the file format is open source, the reality is that you need browsers pre-configured with the non-open source Flash player, which suffers from various problems, and does what a browser can do anyway – bitmap or vector-based graphics, layout and rendering – but in an inferior way."

While few go as far as Fuchs, many are treating it as a stopgap. "Flash remains an excellent tool, but I only recommend it when an app is so complex that the alternatives would take too long to develop with, or the graphics capabilities of Flash lend themselves to a specific purpose," says Morgan Adams of Adams Immersive. "Games are a good example. I create Flash games for clients whose budgets couldn't stretch to any other method." Video and audio also remain Flash-oriented.

"Flash is easier and faster if you want to support the majority of users," says Ate . "However, a lot of the time, Flash is used to make things 'flashy', and so you must determine why you're adding sound, video or animation. Does it improve the user experience, or are you simply reaching for Flash to make a site have a richer experience?"

Current page: Adobe Flash: in demand or in the past?