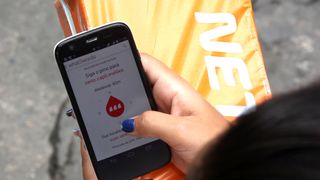 A lot of us wouldn't consider having an address to be a "luxury", but then that's because most of us take it for granted. Whether it's opening a bank account or voting in an election, having a unique address is just one of those things that you need to have - so what happens to those without? That's where What3words comes in.

For the sake of an interface What3words is an app, but more importantly it's a global identification system and a potential solution to a problem. "Addressing around the world isn't good enough," creator Chris Sheldrick told TechRadar. "Even in the developed world addressing doesn't work very well much of the time."

Rather than using long and tricky number/letter sequences, what3words simplifies the process by giving every 3x3 square meter of the world its own unique name - CableLampSpoon, for example - made from three words that have been squashed together. The more densely populated the area, the shorter the words that are used.

It's straightforward to use but the idea behind it is both clever and valid; if it were to be adopted by every person and business on the planet tomorrow, it could be a viable replacement for what we use as our current home addresses. And not just for that: even something as simple as meeting up with friends in a town or at a festival could be make that bit easier with a tool like this.

We have tools like pin dropping on Google Maps, of course, but the creators of What3words don't believe that these systems don't work effectively enough when it comes to sharing a very specific location.

What3words hasn't been around for long, and right now its makers are focusing on getting businesses to adopt its system. Uber doesn't currently accept the what3words protocol but taxi app Bounce does. A number of other services, such as mapping app Navmii, are also starting to use What3words.

"It's early days for us in terms of users so what we're pushing is the infrastructure," said Sheldrick. "We're up to about 25 different apps and services that support. So at the moment, a lot of these things have been finished and we're working to push this out."

Sheldrick also told us that the company is in the "pilot stage" with a couple of banks, which could mean letting people open an account with a What3word address in the near future.

And how does it work for different languages? "What we do is we actually customise it so people have the best experience possible in their own language," said Sheldrick. "We put the shortest possible words in, but the three words are never the same."

As for making money, What3words finds an income from licensing the coordinates to businesses. For you and us, the service is free.

Like many things, What3words will live or die by its adoption. It's picking up momentum, and there's plenty more work to be done, but if the momentum keeps up and more and more people start using it, this has the potential to disrupt an area that no one realised was ripe for it.