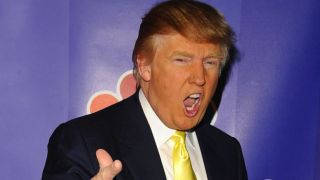 You know what he's saying

Donald Trump, he of "You're fired!" and awesome hair fame, is backing a crowdfunding site called FundAnything that unapologetically draws, um, inspiration from Kickstarter and Indiegogo.

"Crowdfunding got traction with creatives and tech, but you go anywhere but the coasts and they don't get it yet," said FundAnything founder and Trump bud Bill Zanker. "What I'm trying to do is bring crowdfunding away from the Brooklyn hipsters and bring it to the masses."

Trump isn't really known for being in tune with the little people, but he is putting his money where his pearly white teeth rest and fronting the funding for some projects on his own, AllThingsD reported. He'll also tweet out new projects - which can be for just about anything - weekly.

"So many people need help, and this is a good way of doing it by helping very specific problems," Trump told ATD.

The Donald wants you to get your daily news nugget fix, so head on over to our other blips.