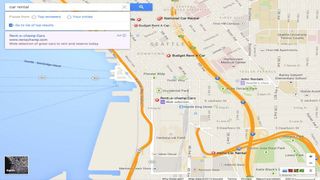 Roam if you want to in the new Google Maps

A massive Google Maps redesign could be on the way as a host of shots of a new, more map-focussed interface hit the web ahead of Google I/O.

According to the Google System blog, the redesign will put the emphasis back on the map while retaining just a bit of Google's technological touches.

Before the days of internet interfaces giving us the tools to input coordinates on a virtual map to guide us to our desired destination, a map was just a giant hard copied picture with lines, numbers and names.

In creating better tools to help us navigate the world, the map itself was compressed; lost under a sea of check points, pop-ups and buttons to press.

But now it looks like Google plans to hark back to those simpler times when finding where you wanted to go was a matter of connecting lines, and everything else was secondary.

The biggest change reportedly coming to Google Maps is the new full-screen view, which does away with the compartmentalizing, and gives you a much cleaner perpsective.

The sidebar looks to be replaced with overlays, which will pop up when needed or are directed above the larger map.

Google+ will now be integrated as well, with recommendations appearing based on the advice of members in your circles.

New color schemes and icons will also appear, which are immediately noticeable in the leaked pics, as are the improved text styles - it may make it a bit easier to differentiate between the streets, businesses, parks, etc.

While the new Google Maps will probably look rather sharp on a desktop, the full-screen approach should translate well to mobile devices, too.

All of this could be the work of a prankster leading honest internet folk on a wild goose chase, of course, so don't take the above as gospel yet. While we asked Google for more on this possible new Maps concept, but with Google IO just a mere week away, we won't be surprised if the company waits until then to give us an inkling of where it's going.