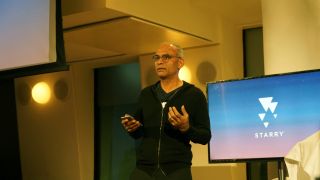 The folks behind Aereo, the service that tried to sell streams of broadcast TV content, are back with another venture poised to scare the pants off not the broadcasters, but the cable operators this time. It's called Starry, and it's aimed to change how Wi-Fi is delivered from top to bottom.

Founder and CEO Chaitanya "Chet" Kanoljia's new Boston and New York-based firm, unveiled in New York City on January 27, will offer internet access wirelessly. But this internet is not over LTE or 4G, like firms such as Clear in the US – it's a brand new wireless delivery standard.

Rather than through underground or pole-bound fiber optic cables, Starry works over a wireless, millimeter wave active phased array system. It's the first time such technology has been used in a consumer setting, and Starry claims that it's allegedly faster than your broadband today.

But wait, there's more: Starry has developed a new kind of router that it calls a "Wi-Fi station," aptly named the Starry Station. It's the end user's gate into Starry's service, but quite a bit more.

Wait, what the hell is a millimeter wave phased array?

Let's break this one up into two parts. First, used largely in military applications and communications up until now, millimeter wave-delivered communications have not been offered to lay folk, like you and I, until now. Without getting too deep into the jargon, it's a wireless signal that operates way off of the usual radio wave spectrums of 2.4GHz and, more recently, 5GHz.

Specifically, the millimeter wave operates between the 25GHz and 30GHz bands on the radio wave spectrum. Almost nothing is using that end of the spectrum, which eliminates much of the noise that would make distributing internet over the crowded 2.4GHz (the one that almost every wireless devices works on) or even 5GHz bands a terribly poor experience.

Second, the phased array part: this is how Starry will deliver its signal. These human-sized devices (pictured above) will be mounted on buildings and in other high-traffic areas within major metropolitan regions – think cellular towers.

However, rather than just broadcast that signal widely, these arrays can direct their signal straight to the stations that are requesting it. Those stations will be mounted by the end users on a window frame (pictured above), much in the same way you'd install an HD antenna or, say, a DirecTV satellite. Finally, that signal will be delivered to your router via a standard WAN Ethernet connection.

Altogether, the system will drastically decrease the installation cost per household on Starry's end, to the tune of just $25 per household as opposed to the projected $2,500 per household that it currently costs the cable operators. (That's according to Kanoljia, mind you.) That means a much faster rollout than any of Starry's entrenched rivals can muster.

But, more importantly for you, that near-total lack of interference also means that Starry can beam up to a gigabit of internet service over the air. You'll be lucky to scratch that with your average cable internet package.

Unfortunately, Starry has yet to disclose plan pricing, as the first public beta test of the service isn't set to hit the Boston area until this summer.

Meet the router of the future

Of course, Starry had to build something to get this juicy Wi-Fi to your devices, and so it crafted the Starry Station. The firm refuses to call it a router but rather a "Wi-Fi station," likely to distance itself from the unanimous hatred toward our little black boxes.

"[Today's router] really has no meaning to the average consumer," Kanoljia plainly stated.

Available for pre-order for $349 (phew!) through Starry's website until February 5 and shipping this March through Amazon's startup program, Launchpad, the Starry Station is undoubtedly a router – albeit a way, way advanced one.

The triangular device offers 802.11ac Wi-Fi, but also is prepared with support for the 802.15ac standard that Internet of Things (IoT) devices will operate on. OK, so it's a router and an IoT hub.

But this one has a fancy, 3.8-inch capacitive touchscreen housed within a triangular, aluminum frame coated in polycarbonate plastic. The Station offers just two Ethernet ports (one WAN), given its size and odd dimensions, but the idea here is all wireless, remember?

"Our goal was to reinvent the way that you interact with your Wi-Fi," Starry head of industrial design Don Lehman said.

Translated, that means more insight into your Wi-Fi connection than ever before, with an intuitive user interface (UI) built on top of Android. The UI immediately offers a "Wi-Fi Health" score, which includes the signal the Station is receiving, the bandwidth available and other factors, but also highlights each device that's using the network in plain terms.

The router – sorry, Wi-Fi station – also offers its own speed test tool (powered by Ookla), as well as network-level parental controls and a device finder system. Not to mention that the UI also auto-generates Wi-Fi network names and passwords that are actually legible.

So, why the triangle? The Station was designed to be readily viewed at a glance from both 10 feet and one foot away. It's that simple.

Are the Aereo folks finally onto something?

It certainly seems that way, at the very least from an hour-long presentation. We won't know for sure until Starry talks plan pricing, but the firm promises that it will charge well under the usual $85 to $100 that the cable operators charge (plus fees) if you turn down their video packages.

Plus, Kanoljia promised on stage that the service would not instate data caps, like its competitors. However, keep in mind that Starry has the luxury to make both promises, thanks to its nigh-miniscule infrastructure costs and that basically no one else will be operating on this end of the wireless spectrum for the foreseeable future.

"Why is there no competition [in US broadband]," Kanoljia asked rhetorically on stage while introducing his new firm. "Number one: infrastructure ... and no venture capitalist is poised to take another company on."

This is a decidedly less controversial venture for Kanoljia and company than Aereo, and for that reason alone Starry stands to, at the very least, perk the ears of long-jaded cable customers. Though, something tells me that the cable operators' ears are downright twitching right now.