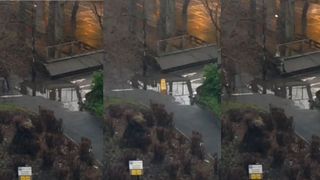 At the point of writing this story, thousands of people are watching a Periscope live stream of people trying to avoid a puddle in Newcastle upon Tyne, UK.

The audience, which has grown from 5000 to 10,000 since we started this story, is currently captivated by people trying to navigate their way around the massive puddle that is seemingly located at the end of an overpass.

Many exciting things have already happened, including a small dog walking across the puddle, and a woman who spent ages trying to find a dry way around it. A couple of people waved. It's all kicking off.

The Periscope was set up by Drummond Central, a marketing agency which probably can't believe its luck right now. Go watch!

'Some have employed a bit of parkour'

"We just did it for our own amusement, really," Richard Rippon, Social Media Manager at Drummond Central, told techradar.

"We were watching the puddle ourselves and laughing at all the people trying to get around it. Then someone came up with the idea of putting it on Periscope, something we've been playing around with recently."

The stream started at around 11:20am GMT / 6:20am ET/ 3:20am PST. Sadly, the surprise 'wet floor' warning sign that appeared was put there by the company running the stream.

"There have been some jumpers, some have employed a bit of parkour by climbing up at the side and other people have just walked right on through it," said Rippon. "It's just gone kind of crazy this afternoon."