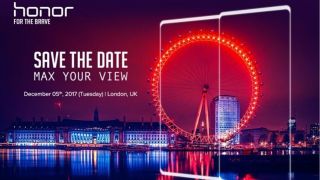 A day after Xiaomi launched the Mi Mix 2 in India, Honor has teased an imminent bezel-less smartphone launch soon. Huawei's sub-brand has already sent press invites mentioning the date and venue of the launch event. According to the invite, the event is scheduled for December 5 in London. While there is no official word from the company about the phone, the invite has gained a lot of attention because it consists of a template most associated with a minimal bezel phone.

Huawei Honor's secret smartphone invite comes with the tagline- "Max your view" which suggests that the company might take wraps off of Note 9 or a new flagship. There are two phones in the invite but it's unlikely that we get both of them. The case here might be that Huawei launches two smartphones, a normal variant and a Pro version.

Additionally, the invite also comes with a hashtag "#IOOI" which indicates that the smartphone(s) in question will, in fact, come with dual cameras. We can also speculate on the fact that the recently announced Kirin 970 chipset might make its way onto the smartphone.

Huawei recently launched Honor 9i in India with a dual camera setup on the front and the rear. It is one of the first phones to come with four cameras. While dual camera setup has been in trend for quite a long time but these days bezel-less phones are gaining more popularity in the market. We recently saw Apple going bezel-less with its iPhone X. Also, the Mi Mix 2 which we have mentioned earlier falls in this category with other phones like Samsung Galaxy Note 8 and LG G6.