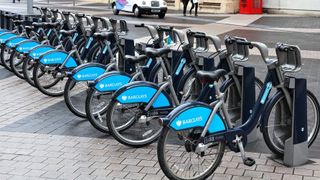 Google Maps now shows the location of bike-sharing docks, and whether there are any bikes there for you to grab and ride right now.

If you've already hired a bike, the app will also tell you whether there's a space in the dock for you to leave it.

In December, Google introduced an option to find nearby Lime scooters and bikes, but it's now extended the feature to include all cycle hire schemes. It's also been widened to 23 major cities in 16 countries.

Google began testing this extended version of the service in New York City last year, but has now expanded it to cover 23 more cities in North America and Europe.

As The Verge reports, Google gets its real-time data from Ito World – a company that it already works with to give real-time info on bus journeys in the UK.

The system isn't yet perfect – bike docks don't appear on the map by default so you have to perform a separate search for them – but it could make it much easier to get around, giving you a view of all nearby bike hire schemes without you having to use each company's own app.

The update is rolling out now for iOS and Android, so keep an eye out for it if you live in one of the supported cities.