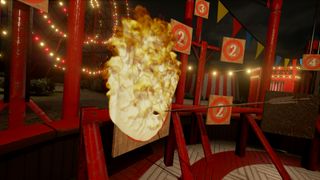 Only with an HTC Vive strapped to my face am I a crack shot with dual revolvers, a deft-handed swordsman and surprisingly spot-on with a mallet. If it weren't for the headset's vacuum-like seal on my face, I would spend a dangerous amount of hours in Nvidia's new virtual reality (VR) carnival.

Of course, I'm talking about VR Funhouse, the storied chip maker's first ever videogame developed in collaboration with its own LightSpeed Studios. The free-to-download, soon-to-be-open-source PC game for HTC and Valve's headset started as a tech demo to showcase the firm's various VR software technologies.

But, as Nvidia continued to iterate on the project, it quickly became much more than a demo. And, boy, am I glad that it did. After spending quite a while with the game recently courtesy of Nvidia, I'm amazed at how intuitive the company has managed to make it feel.

When you start VR Funhouse within a painted wooden circle beset by various carny game stands, there isn't so much as a sign with directions to get you started. Once you figure out that the trigger buttons translate to interacting with and gripping objects, you're off to the races.

Well, figuratively speaking, as you don't do much moving in VR Funhouse, like most VR games of today on HTC and Valve's headset. But that's OK – no matter the mini game, there's plenty of excitement within arm's reach.

While I admittedly haven't played every VR game under the sun, I was blown away by how quickly I picked up the technique required of each mini game. For instance, I've never fired a weapon in my life. But when my hands essentially transform into revolvers in VR Funhouse, I'm shooting clay objects fired out of a moving cannon in seconds – with 95% accuracy.

Granted, VR has years – decades, even – before it can simulate the kickback of a gunshot. But, how quickly I picked up how to accurately fire these weapons is testament to Nvidia's fine tuning of its software and the accuracy of the HTC Vive's sensor setup.

I experienced this sensation of near-instant mastery across the lineup of VR Funhouse mini games, like one in which you wield two swords and pop balloons by either slashing or stabbing them. Exactly how 1:1 my motions are translated in game – right down to how forcefully I press against the balloons, is more evidence of the hardware's accuracy, but also of the capabilities of Nvidia's PhysX in its VRWorks software suite.

Is it the 'world's most advanced VR game,' really?

Well, by Nvidia's standard, sure. The firm lobs this accolade at VR Funhouse because it's the first VR game to use each of the company's software tools within VRWorks.

That's Flow (the simulated fire effects in the archery game), HairWorks (the flowing and reactionary hair of the moles in the Whack-A-Mole and Mole Boxing games), PhysX (realistic physics found in all of the games), FleX (liquid-based physics found in the WallWalker game), VRWorks Audio (used in a hide-and-seek game I wasn't shown) and VR SLI. The latter allows games to stream graphics data from two GPUs at once – one for each lens to reduce latency.

Now, what about by my standards? Having played incredibly gripping games, like EVE: Valkyrie, on final Oculus Rift hardware, I might not bestow such exclusive, high praise upon VR Funhouse. That is, if only because it still is a bunch of mini games rather than a fully-realized world filled with breathtaking cosmic vistas and exciting aerial combat.

For instance, if EVE: Valkyrie were to be updated to use all of the aforementioned technology, I might be inclined to call that the "world's most advanced VR game." (So, get on it, CCP.)

Regardless, VR Funhouse is a load of, well, fun that can be enjoyed for free right now through Valve's Steam service. That is, if you've plunked down the 800 bucks for the HTC Vive and are rocking an Nvidia GeForce GTX 980Ti or better.

(Or, if you're wondering just what the big fuss is about VR, and have gobs of cash, this is a fine place to have that question answered.)

Plus, in addition to making the game open source later this month for developers to make use of what Nvidia has built here, the company plans to release new mini games – to bolster its current seven-game lineup – as downloadable content later this year.

As for whether Nvidia's game development ambitions will grow from here, I'm told that the company isn't interested in going much further down this route. That's a shame, because the firm clearly has the talent to do so. I guess virtual carnival games that are better than the real thing will have to do.