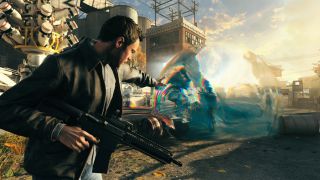 Quantum Break may be coming to the PC, but the bad news is that if you want to play, you'll need to be running Windows 10.

Quantum Break, as you're likely aware, is a third-person shooter from Remedy (of Max Payne and Alan Wake fame) which is hotly anticipated and made our list of top ten games to look out for in 2016.

It's an Xbox One game due to be released in April, although Remedy has only just revealed it will also arrive on the PC – much to the chagrin of some console owners who are threatening to cancel pre-orders as they believe this move devalues the original exclusivity of the title.

At any rate, the minimum and recommended requirements for the PC version have been posted, and they reveal one major hitch for many PC owners – the majority who are still on Windows 7.

And that's the fact that you'll need Windows 10 to play Quantum Break on the PC, mainly because it requires DX12.

So, best hit that upgrade prompt now if you want a piece of the PC action come April (you know, Windows 7 and 8 owners, the pop-up that keeps appearing daily insisting that Windows 10 is "one part Windows 7, one part Windows 8, one part awesome").

But, Windows 10 aside, the most eye-watering spec comes with the recommended graphics card, which is a GeForce 980 Ti or Radeon R9 Fury X, no less. Ouch. Evidently this is one intensive game and if you want to play with the details cranked, it seems you'll need quite a rig.

Note that at the moment, if you pre-order Quantum Break for the Xbox One via the Xbox Store, you'll get a free downloadable copy for Windows 10 also.